At the Aachen Colloquium next week, Ricardo and Geely will present research work into the application of the Ricardo Magma xEV gasoline engine concept into a commercial vehicle series hybrid powertrain, delivering 45% brake thermal efficiency. 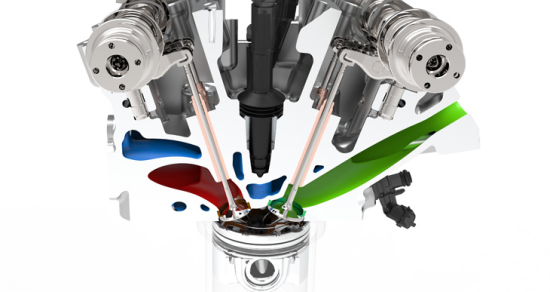 The concept placed particular demands on the boosting system. Early closure of the inlet valves leaves a smaller window for the charge fill the cylinder. Magma, which uses a mechanical supercharger and a turbocharger as well as two stages of intercooling to ensure the charge air is as cold and dense as possible as it enters the cylinder, runs on higher boost pressures than have been the norm.

Magma xEV is an extension of these principles to hybrid vehicles, to take advantage of the new flexibilities offered by such applications.

This engine concept is particularly attractive for series-hybrid and range-extender powertrain applications, in which the driver experiences an EV style of driving with tractive effort provided through an electric motor. As the combustion engine acts as an electrical generator, it can be optimized to a significantly higher level of efficiency.

In the paper co-authored with Geely, Ricardo engineers describe the processes of simulation-led development and physical testing of a single cylinder prototype. The Magma xEV concept described in the paper uses homogenous lean-burn combustion with knock mitigation assessed through approaches including both direct and port water injection.

The results of this research have demonstrated the capability of the Magma xEV to achieve a brake thermal efficiency of 45% in this application, offering the potential of significant fuel economy improvements over and above those of a conventional gasoline engine used in such a series hybrid powertrain.

Alongside this high efficiency hybrid powertrain research with Geely, Ricardo will also be highlighting a range of new concepts and technologies including its recently unveiled high efficiency scalable electric drive unit (EDU); battery pack and management system developments; and its virtual reality engineering review app, which enables collaborative simultaneous engineering design reviews to be carried out by multiple users in different geographical locations.

Well, a gasoline engine can improve from, let's say 37% to 45% efficiency. What if you start with an electric motor at 97% efficiency? If we do not bother about relative and absolute percentages here, would we expect an electric motor to reach 105% efficiency with further development? No! We all have some feelings about the laws of nature to understand that this is not possible. Considering current (average) electricity production in the EU, the Ricardo engine would have lower CO2 emissions than a corresponding EV. So, why would we stop developing ICEs?

Complex but great efficiency for a gasoline powered engine. Probably cheaper than a fuel with about the same overall efficiency.

There is going to be a need for combustion engines for quite some time, because batteries aren't going to work for everything even if we can build enough of them.  Didn't we just see some electrified construction equipment in these pages?  An engine like this is going to have applications all over the place, not just in road vehicles; anything hybridized will be a candidate.

Remember an earlier GCC post that stated that medium/heavy truck category account for 26% fuel use and an April 22, 2016 GCC Post by by Professor Andrew Alfonso Frank, CTO Efficient Drivetrains Inc. and UC-Davis Emeritus, Bruce R. Thomas and Catherine J DeMauro on The Plug-in Hybrid Electric Vehicle with Long Electric Range . Efficient Drivetrains is
now part of Cummins which probably thinks that PHEV might be a good idea for medium/heavy trucks.
Also, note that E-P had some good points on BEV/PHEV which are still valid particularly for larger vehicles.

Good development, but in my opinion too many parts for an ICE that should have as few operating hours as possible in a PHEV.

If you cruise several thousand miles per month on the highway, the extra parts to raise efficiency from 40 to 45% may be warranted. But I think an Atkins engine is better than a Millerized, because of the fewer parts and lower cost.

Perhaps the perfect PHEV engine is just not interesting enough for anyone to do research on and develop for the market. Perhaps the Mahle engine, which was posted here about a month ago.

The better PHEV "engine" might be an HTPEM fuel cell.

Reducing cylinders to 3 or even 2 gets rid of lots of parts, and bulk too.

Stone axes are out of mode most of all because they are impractical. No matter what wonderful material comprised of stones could be synthesized and enhanced with stunning designs; a stone axe remains a stone axe. Time over, forget it.

It is difficult to burn bio and fossil fuels without creating more CO2 and pollution.

The electronic cigarettes are having a similar problem.

Accelerated electrification of ground-sea-air vehicles-industries-homes etc with more Hydro-Wind-Solar-Nuclear and effective storage units plus V2G automated systems and smarter grids may be required.