The boat, to be named Elektra, will be used primarily to transport goods between Berlin and Hamburg as well as on inner-city transport routes in Berlin.

Ballard plans to work with BEHALA and other consortium partners to assist in the design, construction and deployment of the Elektra, with construction of the almost 20 meter long and 8.2 meter wide push boat scheduled to begin this month at the Hermann Barthel shipyard in Derben, Germany, and completion expected by end-2020.

Propulsion power for the Elektra will be provided by the Ballard fuel cell modules along with modular batteries (2,507 kWh capacity). Ballard intends to ship 3 of its FCveloCity 100kW fuel cell modules in 2020 and the company will also support integration, commissioning and testing during the demonstration phase of the project. 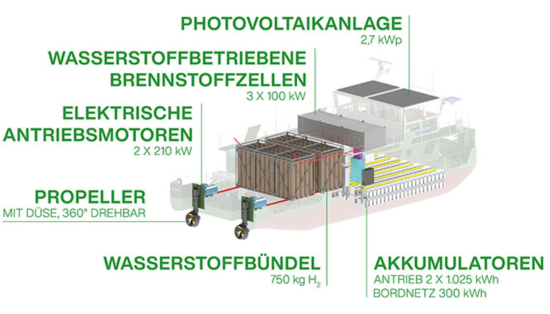 While the Elektra is under construction, electricity and hydrogen infrastructure is planned to be installed in the vessel’s inland waterways operating area.

With maritime transport estimated to emit approximately 940 million tons of CO2 annually, there is increased pressure for the shipping industry to deploy means of reducing harmful pollutants. As a result, zero-emission fuel cells are an integral part of the Elektra design.

The Elektra project is being led by the Department of Design and Operation of Maritime Systems of the Technical University in Berlin. In addition to Ballard, BEHALA and the Schiffswerft Hermann Barthel shipyard, other partners include Anleg GmbH (hydrogen storage tanks), Schiffselektronik Rostock (maritime electronics), EST-Floattech (batteries), and Imperial Logistics.