In the coming winter, in cooperation with the district of Zollernalb, Mercedes-Benz will test how safety on wintry roads and the efficiency of municipal winter services can be improved with car-to-X communication.

Car-to-X is the term used to describe communication between vehicles and the transport infrastructure. Mercedes-Benz passenger cars equipped with car-to-X technology, whose owners have activated the Live Traffic Service, will provide the necessary data for the pilot tests.

Once the ESP or ABS sensors of these vehicles have recognized slippery road conditions, this information, including the GPS data, is sent to the Daimler Vehicle Backend in real time, using the mobile radio network. This anonymized information is displayed on digital maps in the two road maintenance depots of the Zollernalb district in real time. In the future this will make it possible to deploy the winter service more effectively and optimize the use of de-icing salt. 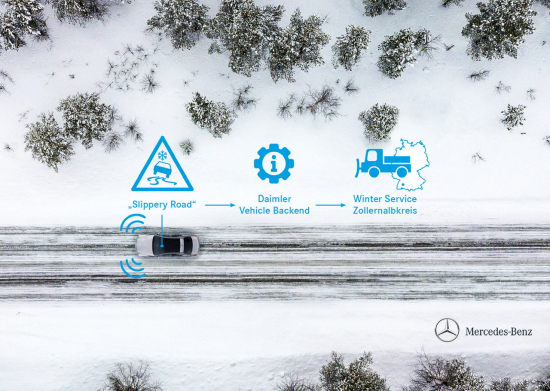 In the next steps it will be possible to include public service vehicles, such as police cars, as well as vehicle fleets. The pilot test will start in January 2020 and continue until the end of winter. The Zollernalb district is in the administrative region of Tübingen in Baden-Württemberg and has around 190,000 inhabitants, many of whom are commuters.

Car-to-X technology significantly extends the coverage of onboard sensors such as radar or camera systems, as the sensors of other vehicles are used in addition. This enables a vehicle to look around the next corner, so to speak. In addition to improving traffic safety, the technology in the pilot project could also contribute to environmental protection, as less de-icing salt is used thanks to targeted application.

Mercedes-Benz already introduced mobile networking in 2013, establishing a technology that allows danger warnings to be transmitted and received. Car-to-X communication has been installed as standard in combination with navigation systems since 2016—first in the E-Class and now in all Mercedes-Benz vehicles—and is available after activation by the user.

To use the Car-to-X service the customer must also hold a Mercedes me connect account. Only then are data registered in the vehicle, and the vehicle-related car-to-X data are sent to the backend where they are anonymized. In addition, Mercedes-Benz drivers can simply object to their data being shared for the purpose of a resale to third parties via their user accounts on the Mercedes me Portal.

The Zollernalb district is challenging in terms of both topography and climate: the region has the highest hills in the Swabian Alb range. In 2018, 82 frosty and 13 icy days were recorded. With its two road maintenance depots in Balingen and Albstadt-Lautlingen, the district is responsible for around 150 kilometers of federal highways, 210 kilometers of country roads and 270 kilometers of district roads.

Mercedes-Benz has been involved in research projects in this field for more than ten years: as one of numerous activities the company started a Europe-wide cooperation project in June 2019. In cooperation with HERE Technologies, Tom Tom and the transport authorities in six European countries, Daimler, BMW and Ford are testing how information about acutely hazardous situations can be passed on using car-to-X technology. The test phase is scheduled to last twelve months, starting in the Netherlands.