Toyota will preview the next generation of its Mirai fuel cell electric vehicle (FCEV) at the 2019 Tokyo Motor Show. “Mirai Concept,” a final-stage development model of the second-generation Mirai will be on view at “Future Expo” from 24 October until 4 November at Megaweb. The re-designed Mirai features significantly greater range, improved driving performance, and an elegant, sporty design that offers increased passenger room and comfort. 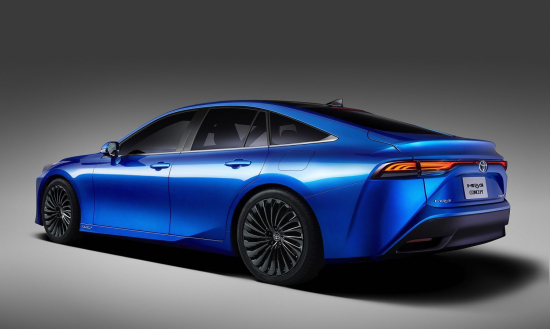 The next-generation Mirai features a fully-redesigned fuel cell system, including its fuel cell stack, that delivers substantially improved performance. This includes targeting a 30% increase in driving range over the current generation due to increased hydrogen storage capacity, among other measures.

Improvements to the fuel cell system go beyond increased range to offer linear, smooth response when pulling away, unity between the driver’s throttle inputs and the car's acceleration. Handling is light and easy on winding roads, while highway driving produces an exceptional sense of power at all speeds.

Full details of the next-generation Mirai’s improved performance will be released at a later date.

Launched in 2014, the first-generation Toyota Mirai combined a driving range with refueling time equivalent to conventional vehicles and emissions of nothing but water. Since then, approximately 10,000 Mirai have been sold globally.

Scheduled for launch starting in late 2020, initially in Japan, North America and Europe, the second-generation Mirai has also been redesigned based on Toyota’s premium rear-wheel drive TNGA platform to combine greater agility and driving performance with a sleek and elegant exterior design.

The Mirai Concept will be presented in a newly developed exterior color (Force Blue Multiple Layers), that uses layers of color to achieve exceptional brightness and depth.

The interior, equipped with a 12.3-inch wide screen on the center console and instrument panel that embraces the driver, provides a simple, modern space to create a feeling of warmth and comfort. The fuel cell system configuration using the TNGA platform also allows for five seats instead of the current-generation Mirai’s four.

Engineered from the start to accommodate Toyota’s full range of powertrains, including hydrogen fuel cells, Toyota’s latest modular platform gives the Mirai Concept a higher degree of body rigidity, which contributes to greater agility and responsiveness, and a lower center of gravity, which makes for nimble, rewarding handling.

I’m looking forward to seeing the specs on the fuel cells etc. I reckon they may have improved the power output from 3.1KW/L to around 4KW/L.

OTOH I am not keen on the body style they have chosen, and would not fancy a low long car.

Parking a nearly 5 metre long car in Europe or Japan is a pain.

This seems to be a larger car for USA's market. A large pickup FCEV would be appealing south of the border?

They have gone for the sporty look, presumably thinking that they can mor easily get a premium, and of course it is aerodynamically more efficient.

I prefer Hyundai's Nexo and the CUV/SUV approach.

If you are selling at a premium price offer a premium car.
This one has a more Lexus look, may attract more buyers.

The real Toyota to look at is the RAV4 PHEV.

A Toyota RAV4 FCEV could also be interesting?

i may be wrong but I will be very surprised is this goes very far at least in the US. GM and Ford looked at fuel cells about 20 or 30 years ago and have decided to go with plug in hybrids or full battery electric. Fuel cell vehicles are more complex and expensive and still need to have a moderate size battery pack for instant power. They have less than half the overall efficiency of battery electric vehicles and you have to deal with all of the complexities of high pressure hydrogen which has a low energy to volume ratio, leaks thru everything, and cause metallurgical problems. Faster charging batteries will probably be the death knell for fuel cells in private vehicles and all shorter range buses and delivery vehicles and even, eventually, for long haul trucks.

@sd
That is more or less what I've been saying for nigh unto 2 decades.

FCEVs can solve most of the limitations found with current batteries. The small battery pack required could be replaced with new upgraded super caps? FCEVs could be used positively to fill part of the grid peak loads and during grid failures with by-directional Vehicle to Grid connections.

The clean H2 required could be produced with excess clean energy from REs. Lower cost clean H2 could be stored and/or transported by trucks or by existing NG upgraded pipelines.