Modern piston assemblies are subject to high demands in terms of both loading and lifetime; in addition, there is the environment-friendly demand for low engine emissions. KS Kolbenschmidt has developed its LITEKS concept for particularly low-friction piston systems installed in highly loaded gasoline engines. The supplier is now introducing its fifth generation system.

Once more it reduces friction within the piston assembly and meets the highest demands in terms of fuel consumption, emissions, noise, and service life.

An important development goal behind the new generation of pistons is the combination of flexibility—through which a better match can be achieved—with a certain stiffness, which is necessary for the long-term durability of the piston.

LITEKS 5 builds on its predecessor, LITEKS 4. The concept achieves an improved interaction of the piston skirt with the cylinder liner surface through the influence of skirt stiffness and a further improved piston profile. This results in a significant reduction of friction without any compromise in piston noise or durability. 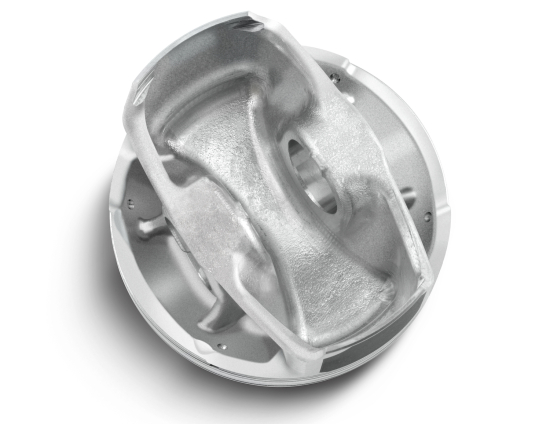 In engine operation, the thrust and anti-thrust sides are subject to differing boundary conditions between the skirt surfaces and the cylinder. These conditions are reflected in larger or smaller support zones which allow the varying forces to be absorbed and the piston to remain flexible enough to minimize the hydrodynamic force.

The improved interaction with the cylinder working surface results in a reduction of up to 20% in friction losses at the piston skirt. This is also reflected in fuel savings of around 1% in the WLTP compared to the series reference.

In order to achieve the defined piston friction targets for the latest product generation, numerous elasto-hydrodynamic multi-body simulations were carried out from the beginning of the development phase. The focus was on a robust solution that takes equal account of friction and service life.

The first prototypes of the new piston generation were tested in a floating liner engine and were able to demonstrate the friction advantages. Under part-load conditions, which are of great importance for actual operation, friction was reduced by around 15% on average.

In order to quantify the actual CO2 savings, the measurement results of the floating liner engine and the elasto-hydrodynamic multi-body simulations of the LITEKS 5 concept were simulated in a class-C vehicle in WLTP and FTP-75 cycles. The results confirmed the above-mentioned gain of around 1%.

The comparative values were derived from a series reference and the results of the preceding generation Liteks 4 from previous years. They have also been confirmed by measurements carried out by an international OEM.

Piston assemblies based on the LITEKS lightweight design concept are now in series production release for several engine models or are about to go into production. Since the market launch of LiteKS back in 2006, more than 120 million such pistons have been installed in engines worldwide and have thus contributed to an improvement in pollutant emissions.

Diamond-Like Carbon for low-friction piston rings. In order to comply with today’s CO2 legislation, smooth cylinder surfaces are currently being used in series production in addition to the low-friction pistons. In conjunction with piston rings coated with a hard material such as Diamond Like Carbon (DLC), they enable a significant reduction in friction at engine map.

The low-friction piston rings were developed jointly with alliance partner Riken and are about to go into production. Compared to today’s series, the optimized piston system with the combination of piston and rings is characterized by further CO2 saving potentials and consistently low oil consumption.