This is the latest in my series of analyses on the relationship between road transportation and economic activity in the United States. Of interest in this study were the changes in distance driven per inflation-adjusted GDP (gross domestic product) since the end of the Second World War.

For each year from 1946 through 2017, distance driven by all vehicles was obtained from the U.S. Department of Transportation, while GDP in chained 2012 dollars came from the U.S. Bureau of Economic Analysis. (Several values in each set were recently updated.) The results are shown in the chart below. 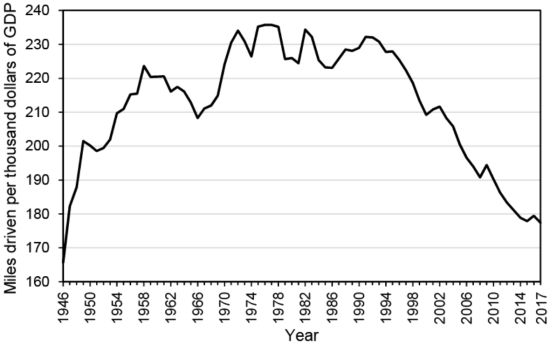 The most noteworthy finding is the decrease in distance driven per unit of economic activity since the early 1990s. A possible explanation for this pattern would be an increased proportional contribution to GDP from activities that do not require road transportation. Indeed, there are several lines of supporting evidence for this hypothesis: