Volkswagen Caminhões e Ônibus (VWCO) announced its partners for its first mass-produced electric truck: the 14-tonne e-Delivery. Partners are Bosch, CATL, Moura, Semcon, Siemens, Weg, Meritor and Eletra. All are part of the e-Consortium in VWCO’s development and production complex in Resende (RJ). 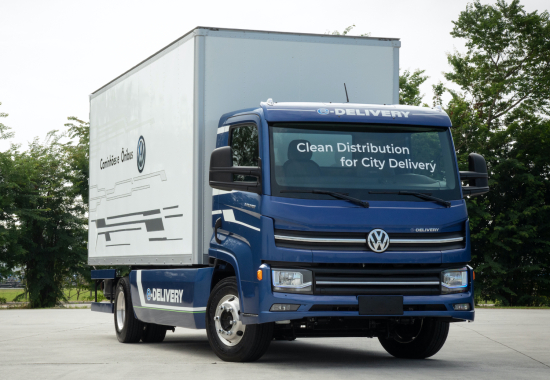 VWCO announced the formation of the e-Consortium at a press conference at the Fenatran Trade Show on 13 October.

Serial production is scheduled to start in 2020 with the e-Delivery being the first in VWCO’s electric portfolio. Factory adjustments are already underway and involve preparation for the assembly of electrical components, vehicle energization and quality inspection in an area specifically designated for e-Delivery.

Following will be the 11t e-Delivery model.

Within the e-Consortium Siemens will provide infrastructure, chargers and power to customers. CATL and Moura are responsible for the supply, management, distribution and maintenance of batteries. Bosch and WEG will supply components; Semcon will provide engineering services; Meritor will provide the axles of the electric vehicles. Bus company Eletra is a strategic partner.

The e-Consortium follows the model of the Modular Consortium; in this model, seven suppliers share responsibility for assembly with VWCO vehicles within the factory, with increased productivity and quality levels and reduced costs.

The e-Consortium is the next step. Precisely because of the demand for the feasibility of electric technology, new partner companies enter this business model to expand their operations beyond the factory gates, going wherever the customer is. And this involves, for example, analyzing and installing recharging terminals in customers’ garages anywhere in Brazil.

The first truck developed in Brazil to go into series production in 2020 is the 14 ton e-Delivery, designed in the 6x2 configuration. The model features a new powertrain suite and modular architecture to service the entire portfolio of Volkswagen electric commercial vehicles.

The electric motor delivers up to 260kW of power with range of up to 200 km (124 miles), varying according to operating conditions. Battery recharging can be performed flexibly (30% in 15 minutes or 100% in 3 hours) to meet the most varied demands of the operation, as well as the availability of infrastructure.

The 14t e-Delivery also features intelligent vehicle mass readings to adjust energy consumption in conjunction with Eco-Drive Mode. Chassis, wheels and tires follow the traditional characteristics and robustness of the new Delivery line, sharing platform components to ensure synergy and scale of components also with the diesel family, with a view to reducing costs.

In addition to extremely low noise and zero emissions, comfort is ensured by the air suspension system, which makes the onboard experience much more comfortable, reducing fatigue and contributing to increased operating productivity.

To maximize e-Delivery performance, the brake has a dynamic regeneration system capable of recovering up to 35% of the braking energy that will be used to recharge the batteries. The regenerative brake acts in combination with the service brake to provide maximum vehicle deceleration and lower component wear, which greatly reduces maintenance cost and increases vehicle availability in operation.

VW Trucks and Buses was the first manufacturer to test, under real operating conditions, an electric truck in Brazil. Just over a year after Ambev Brewery announced that it will have more than one-third of its partner fleet of at least 1,600 electric Volkswagen trucks by 2023—the largest announcement of its kind—the two companies celebrate achievements for the viability of electric distribution.

In addition to signing a global cooperation agreement for the development of an electric mobility business model, the two are working together to test the e-Delivery electric truck, which has run more than 15,000 kilometers in engineering tests and real life conditions in the city of São Paulo.

The electric truck is recharged with 100% electricity from clean sources such as wind and solar; 43% of its energy comes from the vehicle’s own regenerative brake system.