Researchers at Zhengzhou University, Tsinghua University and Stanford University have developed a solid-electrolyte-based liquid Li-S and Li-Se (SELL-S and SELL-Se, respectively) battery system with the potential to deliver energy densities exceeding 500 Wh kg-1 and and 1,000 Wh L-1, together with the ability of low-cost and stable electrochemical performance for future concentrated and large-scale storage applications.

The batteries use a Li6.4La3Zr1.4Ta0.6Othe (LLZTO) ceramic tube as electrolyte and work at temperatures higher than the melting point of lithium. Polysulfide or polyselenide shuttle effects and lithium dendrite growth are effectively prevented, and high energy density, together with high stability, fast charge/discharge capability, high Coulombic efficiency, and high energy efficiency, can be achieved. A paper on their work is published in the journal Joule.

Additionally, a large volume change of solid S and Se during charge and discharge causes the abscission of active S or Se from the current collector, causing cycling instability and decreasing the usage of Se and S. These issues have seriously impeded the development of Li-S and Li-Se batteries. 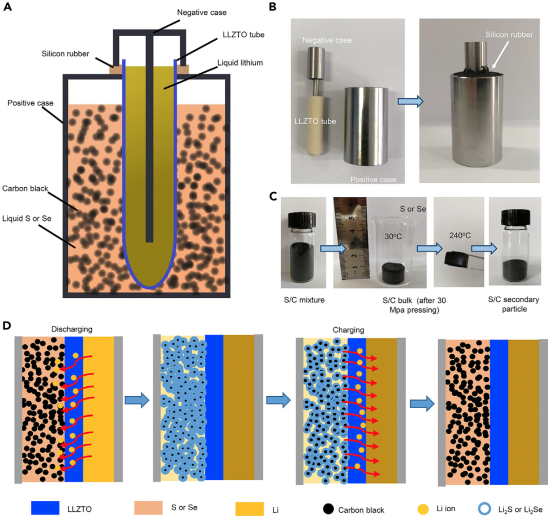 The SELL-S and SELL-Se batteries consist of a liquid lithium-metal anode; a molten S or Se cathode with carbon black, and an LLZTO ceramic tube electrolyte. The Lithium-metal anode is inside the LLZTO tube, and a stainless steel rod is inserted, serving as the current collector for the anode.

A S(Se) cathode with a carbon black conductive additive (with a mass ratio of m(S or Se):m(C) = 9:1) is inserted into the stainless steel cylindrical container outside the LLZTO tube, being physically and electronically separated from the lithium anode by the LLZTO tube.

The stainless steel cylinder works as current collector for the cathode at the same time. The conductive carbon needed for molten S and Se only occupies 10% of the total electrode weight, so the dead weight is minimized.

Funny, I recall sodium-sulfur batteries being the "in" thing back in the 1970's.  They satisfied Sadoway's criterion of being cheap because made of dirt (and ocean water).  Not sure what the advantage of lithium over sodium is here.  Well, Li2S melts about 240 C lower than Na2S, but 938 C is still ridiculously hot for a battery.

The batteries above have higher energy density by a factor of 2 and 4 respectively. This energy density advantage is not as critical for stationary storage applications as for mobile applications, although a smaller footprint will still have some advantages. The real key to the economics is the lifetime cost per kWh delivered which cannot be evaluated from the information given

So these batteries have the Lithium ions chemically react with the S/Se, which deposits around the carbon granules as Li2S or Li2Se. Current Li-ion battery doesn't have a chemical reaction just transport of ions. It looks like this is designed to overcome the massive expansion of Sulphur , but I can't tell if the gap above the liquid S/Se at the top of the diagram A is for that purpose. Why the choice of S or Se? Sulphur seems better and cheaper. Is there an inherent problem with it, other than expansion?

For static storage solution improvements in density are good, but cost is the most import consideration. This seems to be 1/6th the cost of Li-ion per kWh (why have they written kWh-1 in the quote? "Kilowatts per hour", not "Kilowatt-hours"?). But that for a convention Li-S battery and material costs only, not this new configuration.

The high temperature needed for the battery to work makes use in a mobile application difficult, because of the need for instant available power at power-up. (would you really want to keep those batteries that hot 24x7 even within an insulated package?) This brings up the question of what happens if you let these batteries cool to room temperature and re-heat them again. Is that even feasible?

You could have a hybrid solution where a small Li-ion battery is used to get you going for the first 5 miles or so, while simultaneously heating the first Li-S pack. Once it is up to temperature, it is used for locomotion, and warming the next pack up, plus recharging the Li-ion so that should the vehicle stop and park right at that moment, there is enough charge in the Li-ion battery to repeat the start-up process.

The doubling of the power density (if that really pans out when commercialized) might bring electric light aircraft into viability. Again, a small Li-ion battery pack would allow taxi and warm-up operations, take-off and cruise would need the Li/S battery to be fully operational, with the Li-ion battery as an emergency reserve.

Also no info on the cost of making that LLTZO sleeve. Lanthanum and Zirconium are abundant but Tantalum is considered a conflict resource, despite having reserves in places like Australia and Canada (where it is marginally economic or not depending on demand).

why have they written kWh-1 in the quote?

The "-1" was a superscript in the original, but the copy-paste operation loses most of the formatting and I don't think you can use superscript here anyway.