Green Zones support San Francisco’s approach to greenhouse gas reduction, taking advantage of the latest battery-electric technologies to convert the SFMTA’s (Muni’s) fleet of hybrid buses into part-time electric buses, as an intermediate step on the way to full electrification of the fleet by 2035.

With this technology, buses will run part of their route on electric power, reducing emissions in specific sections of the city with the worst air pollution.

San Francisco launched the Green Zone program, creating the first program of its kind in the world with 68 geofencing hybrid-electric buses—around 8% of the SFMTA bus fleet. With a fleet comprising all-electric trolley or hybrid buses, the buses mark the end of SFMTA’s reliance on all-diesel engines.

The SFMTA will operate Green Zones (areas in which the vehicle will not produce any emissions) along several electric hybrid routes that eliminate emissions by running only by battery for key portions of the route. This requires turning off engines in defined areas, and instead operating only in electric or “EV” (zero-emission) mode.

The geofenced zones were chosen to focus primarily on Muni Equity Strategy neighborhoods—those neighborhoods in the city with high percentages of low-income households and people of color and where respiratory illnesses occur at a disproportionate rate. Green Zone buses have begun operating on the 28/28R, 43, 19, 2, 47 and 12 lines. 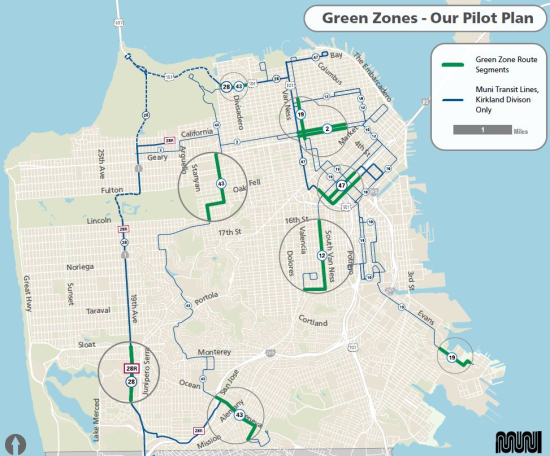 Greater Montreal QC is progressively introducing 350 new BAE Hybrid buses as an interim measure, while adapted e-buses are being tested and produced.

However, the new Hybrid buses are not equipped with enough batteries to operate as e-buses for extended periods. This could be corrected with new generation improved battery packs?