The European Environment Agency’s (EEA’s) “Air quality in Europe — 2019 report” shows that almost all Europeans living in cities are still exposed to air pollution levels that exceed the health-based air quality guidelines (AQGs) set by the World Health Organization (WHO). 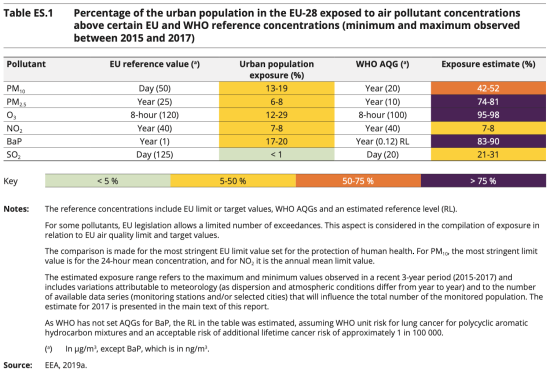 The new EEA analysis is based on the latest official air quality data from more than 4,000 monitoring stations across Europe in 2017.

According to the EEA analysis, fine particulate matter (PM2.5) alone caused about 412,000 premature deaths in 41 European countries in 2016. About 374,000 of those deaths occurred in the European Union (EU).

Despite persisting pollution, the new EEA data confirm that binding regulations and local measures are improving Europe’s air quality with positive health effects. For example, fine particulate matter caused about 17,000 fewer premature deaths in the EU in 2016, compared with 2015. Even though weather differences between years can affect pollution levels and their impacts, the reduction is consistent with the EEA’s earlier estimate that the number of premature deaths caused annually by PM2.5 in Europe have been reduced by about half a million since 1990.

Road transport, power plants, industry, agriculture and households are the main sources of air pollutants. These sources are closely linked to Europe’s core systems of production and consumption, and are also key drivers of greenhouse gas emissions and biodiversity loss.

The European Commission is organizing the second EU Clean Air Forum, hosted by the Government of Slovakia in Bratislava, on 28–29 November 2019, to discuss the development and implementation of European, national and local air policies, projects and programs. The 2019 Forum will focus on energy, agriculture, and clean air funding mechanisms.

Damages created to inhabitants will be very costly to repair, if possible?