Home About Contact RSS GCC Twitter Newsletter
Number of electric buses in Europe has increased from around 200 to 2,200 in 5 years
Latest Ricardo Software release features faster analysis and electrified motorcycles

In Japan, Toyota Motor Corporation (Toyota) unveiled the new model Yaris. Scheduled to go on sale in Japan starting in mid-February 2020, the new Yaris will be exhibited at VenusFort in Odaiba, Tokyo during the Tokyo Motor Show 2019. The new Yaris will also be displayed in showrooms throughout Japan from the end of October to December. 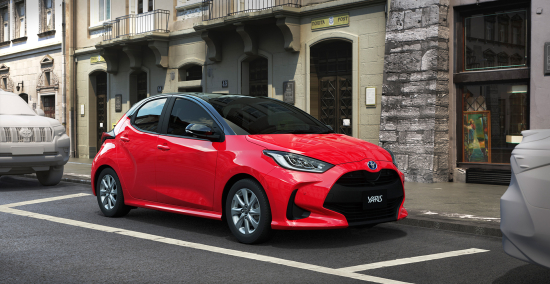 The first-generation Yaris was created in 1999 as a car that would serve as the global standard for compact cars by enlisting the full portfolio of Toyota’s technology. Toyota re-designed the platform and all major components, including the engine, transmission, and suspension to achieve generous cabin space and outstanding basic performance in a minimum size.

The new Yaris is a new-generation compact car that adopts the Toyota New Global Architecture (TNGA) platform, on which Toyota will base its compact cars for developed countries in the future, and features components built entirely from the ground up, including the engine, Hybrid System, transmission, and suspension.

In addition to the light yet highly rigid body and low center of gravity, the Yaris is offered with four different powertrains to deliver agility, superior comfort, and smooth and direct acceleration:

In addition to pursuing Toyota’s ongoing goal of developing the world’s highest level of fuel efficiency for a hybrid vehicle, the new Yaris is offered with E-Four (electric four-wheel drive system), a first for a Toyota compact car.

Toyota is among the first to adopt an array of advanced features challenging the common hierarchy based on car size, such as Advanced Park, Toyota’s advanced parking support system (a first for a Toyota vehicle); the latest Toyota Safety Sense, which has been expanded to detect oncoming cars when turning right at an intersection and pedestrians crossing the street when turning right or left; Turn Tilt Seats (equipped by Toyota for the first time) which facilitate entering and exiting the vehicle; and Display Audio (standard on all models), which can connect with smartphones.

An accessory power outlet (1,500 W) is available for the hybrid version of the cars. With the accessory, electricity from the vehicle can be used to power electrical devices and appliances using the same type of electrical outlets found at home. Additionally, the vehicle can serve as an emergency power generator in cases such as blackouts.

This marks the 20th year since the first Yaris debuted, so we wanted to build a new-generation compact car that goes far beyond customers’ preconceptions about class by building on the strengths of the Yaris as a compact car while revamping the platform, powertrain, and all other components. Compact cars are driven by many people, so offering a pleasurable drive was a priority, but it also prompted us to use the Yaris as the starting point of cars with the world’s highest level of fuel efficiency and secure safety technology.

—Chief Engineer Yasunori Suezawa, in charge of development of the new Yaris

TNGA for compact cars. The new model Yaris is Toyota’s first car to adopt the platform (GA-B) for compact cars, which features a body developed to be lightweight and highly rigid with a low center of gravity. The platform achieves both superior handling stability and a high-quality ride by shedding 50 kg in vehicle weight compared to the conventional model, increasing torsional rigidity by at least 30%, and lowering the center of gravity by 15 mm. It also delivers driving performance beyond its class by being agile yet confident and natural (the vehicle remains stable while driving yet responds naturally to the driver’s intentions). 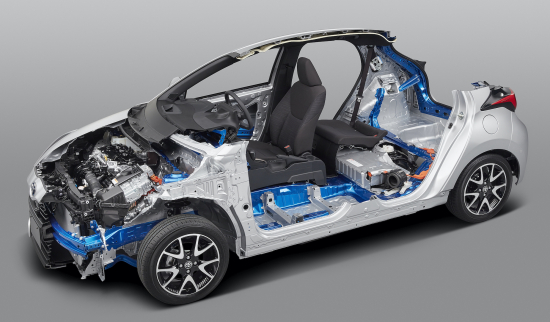 The newly developed 1.5-liter inline three-cylinder Dynamic Force Engine is based on the TNGA design philosophy. This engine uses high speed combustion technology, such as a longer stroke and expanded valve angle to achieve both low fuel consumption and high output. 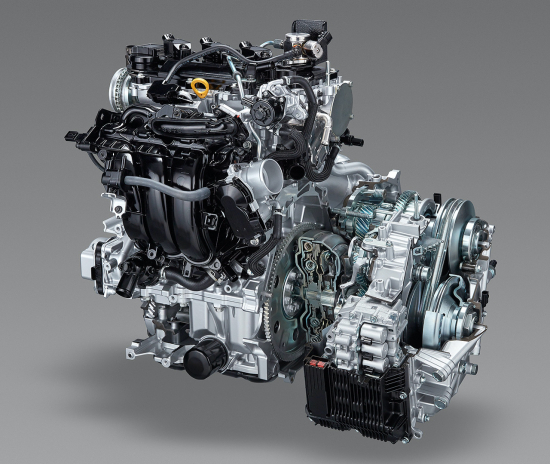 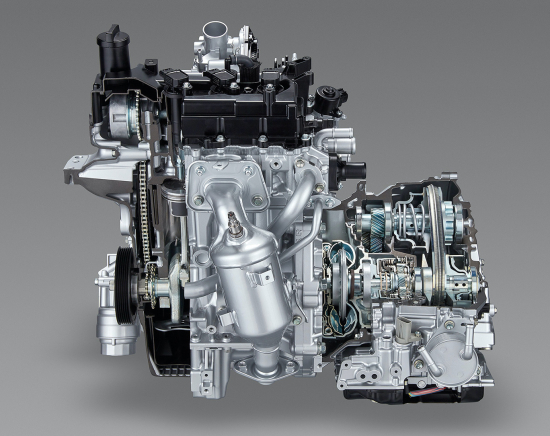 The new-generation 1.5-liter Hybrid System (adopted by Toyota for the first time) achieves greater fuel efficiency by enhancing the efficiency of the entire system and by adopting a dedicated engine designed for the Hybrid System and the other newly developed hybrid units. 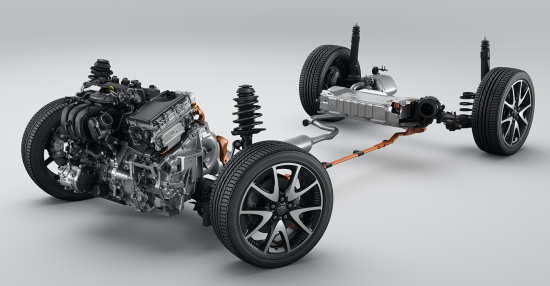 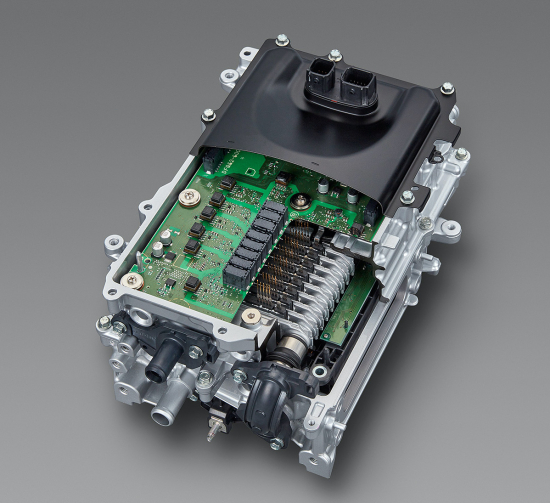 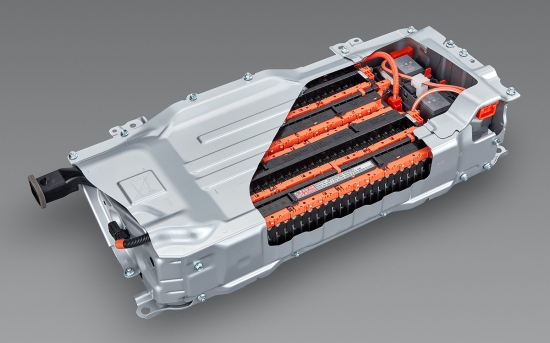 In addition to achieving the world’s highest level of fuel efficiency for a hybrid vehicle, acceleration has also been enhanced to in pursuit of both fuel efficiency and performance. E-Four is being offered on a Toyota compact car for the first time. 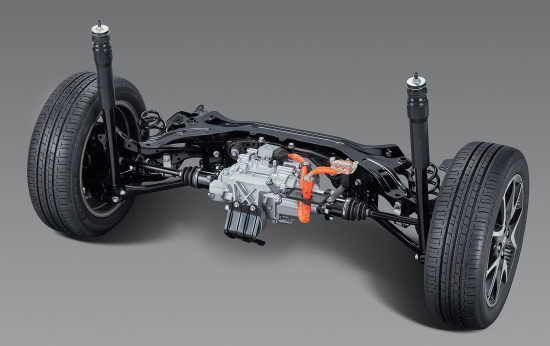 The pre-collision safety system detects pedestrians during the day and night and cyclists during the day to help prevent collisions and mitigate damage. The sensing system has been expanded to prevent accidents at intersections by detecting oncoming cars when turning right and pedestrians crossing the street when turning right or left (adopted by Toyota for the first time).

Toyota also added Low Speed Acceleration Control (adopted by Toyota for the first time) to support the prevention of collisions caused by pedal misapplication at time of reduced speed. This uses millimeter-wave radar and a mono camera to recognize bicycle riders and pedestrians immediately in front of the car. This control helps prevent collisions and mitigate damage by suppressing the engine output or by lightly applying the brakes to suppress acceleration if there is an object in front of the car and the accelerator pedal is depressed with excessive force when starting from a standstill or during low-speed operation.

The new Yaris is also equipped with a Secondary Collision Brake, which contributes to mitigating the damage caused by secondary collisions. The Secondary Collision Brake and the brake lights are automatically activated if the SRS air bag sensor detects a collision and activates the air bags. This decelerates the vehicle to mitigate damage caused by secondary collisions.

For the first time, Toyota is introducing Advanced Park, which represents the cutting edge of Toyota’s Advanced Parking Support System and is based on Toyota’s automation concept of having the car and driver act as partners.

This system supports parking operations by controlling not just the steering wheel, but also the accelerator and brakes (the driver needs only to operate the shift lever according to instructions). The system alerts the driver with audible warnings and applies the brakes to help avoid minor collisions by using cameras and ultrasonic sensors to monitor the vicinity of the car.

By setting the parking spot in advance, the system can also park in spots without white lines—a world first.

Sounds great but alas far too late. 10 years ago I would have bought this car immediately but now I've gone electric for several years and shall never return.

Yes, Toyota (the world number one, now as large as the combined Big-3) has taken a long time to shift from ICEVs to HEV/PHEV/BEV/FCEV and will have to catch up.

The main reason for this delay seems to be the availability of lower cost, higher performance batteries, that could negatively affect Toyota's known reliability?

Our Toyota HEVs are as reliable as the other Toyota ICEVs but 30% to 40% more energy efficient. They are a good first step.

Toyota is one of the top ten highest revenue companies in the world.

Toyota had an early advantage in hybrid vehicles and then blew it. They should have gone from NiMH batteries to Li-ion a long time ago and made plug in hybrids more available and then brought full battery electric vehicles to market. I do not believe it was a lack of reliability as Tesla, Ford, GM, etc. have not had that much problem with their batteries. Early on, the Nissan Leaf had problems in warm climates but I believe that they have solved those problems.

If Toyota was so serious about reliability, they would not use the continuously slipping, continuously wearing CVT transmissions in their vehicles. Sometimes the cheap manufacturing solution is not the low cost solution to own.

For those that would say that this step in the world of hybrid and electric cars is a missed opportunity are simply keeping their sights short sighted as there are hundreds of other factors to consider. I’ll only go over a few.

For starters, notice the model they decided to use on an hybrid car... it a subcompact. There’s a very small number of subcompact vehicles in the market that would have actually been considered popular. Using the Yaris is a very safe bet in both production as well as experimentation of design principals. The Yaris is technically the cheapest Toyota you can get these days, and it would be in Toyota’s best interest to keep it that way.

Second is the choice of battery. Toyota has in fact been utilizing Li-ion batteries in their Prius since 2009 as well as NiMH. What most don’t understand is that NiMH is just as capable as Li-ion for hybrid models. Only difference is the number of charge cycles and charge retention. The reason why Toyota kept the NiMH is because of cost, other wise hybrid owners would be dropping an extra $2000-$5000 for the Li-ion version (which they did offer for higher trim models).

Toyota is exactly where they need to be in the transition from hybrid to electric, as they are aiming at making the whole electric market a step cheaper. Many tend to forget that a full electric Tesla Model 3 is still very expensive. $35k for the base model (compare the luxury brand Audi A3) and only doubling that will put you in the base Tesla Model S. That’s still outside of what is considered affordability for the general public. Also thanks to the industry I work in, Tesla is still far from prefect in the electric vehicle market. The big reason why they’re doing so well is because their part of the market isn’t saturated with competitors’ electric cars. Thanks to marketing tactics, there a lot of the flaws and flawed designs of all the Models are not apparent to mainstream media aside from their autopilot issues (which are improving day by day).

Just wait it out and see this step as an opportunity. Eventually, you’ll be able to drive a sub-$30k brand new electric car. For now, we’ll just enjoy a sub $20k hybrid as it’s likely to replace the Prius C.

Currently, I am driving a fully equipped 2019 Chevrolet Bolt with an EPA rated range of 238 miles that with the dealer and GM discounts and the federal tax rebate came out to be sub $30K.