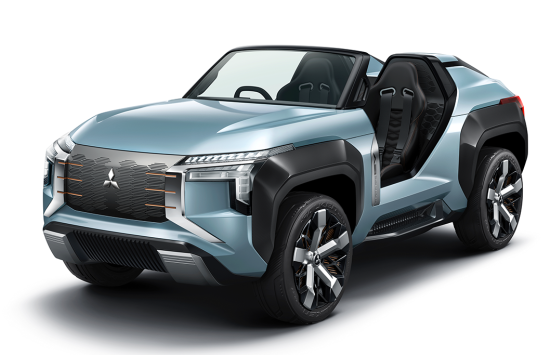 Ashwani Gupta, chief operating officer, MMC, added that MMC plans to employ any of its electrification technologies to new mid-size and compact SUVs by 2022 as well as Kei cars in the near future.

The MI-TECH CONCEPT was built to be a “small plug-in hybrid electric SUV that delivers unparalleled driving pleasure and confidence over all terrain in light and wind.” This concept car features a lightweight, compact, new PHEV drivetrain, a four-motor electric 4WD system, and advanced driver assist and preventive safety technologies—all packed into the small-sized electrified SUV.

Another benefit of the gas turbine is its flexibility to run on a variety of fuels such as diesel, kerosene and alcohol which can be selected depending on the regions. Further, its exhaust is clean so it responds to environmental and energy issues.

When driving off-road and two wheels are spinning out, the ability to transmit the optimal driving force to all four wheels makes it possible to transmit force to the two wheels still on the ground and keep driving. MMC has thus delivered a safe, exhilarating driving experience in which the driver feels with the vehicle in all conditions, either in daily driving or when traversing rough roads, while also allowing for thrilling new driving experiences such as 180-degree spins by counter-rotating the left and right tires.

Equipped also with MI-PILOT, next-generation driver assistance technology, the concept car extends driver support not only on freeways and ordinary roads, but also on unpaved roads.

The high-capacity drive battery comes installed under the floor in the center of the vehicle. While it employs the Twin Motor system that places high-output, high-efficiency motors at both the front and the rear, the PHEV drivetrain has been made more compact and the layout has been optimized to deliver more passenger space and make it possible to offer a package with three rows of seats.

The 4WD system employs AYC to control the distribution of drive power among the front two wheels, along with full-time 4WD with the Twin Motor system that places high-output, high-efficiency motors at both the front and the rear. These are combined with MMC’s Super All Wheel Control (S-AWC) integrated vehicle behavior control system which dramatically boosts driving performance - driving, cornering, and stopping - by integrating control of braking force at each wheel (Anti-Lock Braking System - ABS) and the front and rear motor output (Active Stability Control - ASC).

Wasn't crazy made compulsory a few years back? anyhow this is concept teaser.
I guess designers are thinking about lightweight backup on board charging for no go situations as more relevant than as a range extender .
Reminds me of the emergency flat tyre seen on many modern vehicles.
Does a drivetrain get any better? The added cost may not be as high as one may think as duplication is for a very few downsized components and even fewer xtra manufacturing processes.

Note single speed transmissions in combination with switchable (free-wheeling) motors on front and rear axles has shown energy savings as well as acceleration and F/R handling capability. I would suggest that 4 motor vectoring and power delivery would leverage those advantages.