Northwestern’s Kenneth R. Poeppelmeier, the Charles E. and Emma H. Morrison Professor of Chemistry at Northwestern’s Weinberg College of Arts and Sciences, director of Northwestern’s Center for Catalysis and Surface Science and member of Northwestern’s Program on Plastics, Ecosystems and Public Health, co-led the work with Aaron D. Sadow, a scientist in the Division of Chemical and Biological Sciences at Ames Laboratory, and Massimiliano Delferro, group leader of Argonne National Laboratory’s catalysis program.

Each year, 380 million tons of plastic are created worldwide. As the plastics market continues to increase, many analysts predict production could quadruple by 2050. More than 75% of these plastic materials are discarded after one use. Many of them end up in oceans and waterways, harming wildlife and spreading toxins.

There are certainly things we can do as a society to reduce consumption of plastics in some cases. But there will always be instances where plastics are difficult to replace, so we really want to see what we can do to find value in the waste.

While plastics can be melted and reprocessed, this type of recycling yields lower-value materials that are not as structurally strong as the original material. Examples include down-cycling plastic bottles into a molded park bench.

When left in the wild or in landfills, plastics do not degrade because they have very strong carbon-carbon bonds. Instead, they break up into smaller plastics, known as microplastics. Whereas some people see these strong bonds as a problem, the Northwestern, Argonne National Laboratory and Ames Laboratory team saw this as an opportunity.

We sought to recoup the high energy that holds those bonds together by catalytically converting the polyethylene molecules into value-added commercial products.

The catalyst consists of platinum nanoparticles—two nanometers in size—deposited using atomic layer deposition onto a perovskite nanocubes, which are about 50-60 nanometers in size. The team chose perovskite because it is stable under the high temperatures and pressures and an exceptionally good material for energy conversion. 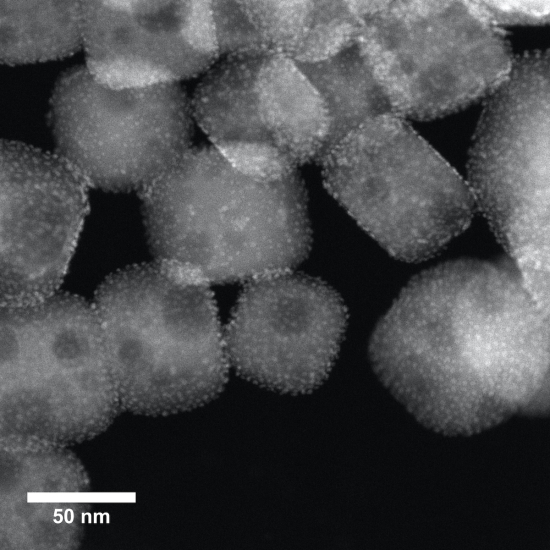 Pt/SrTiO3 completely converts PE (Mn = 8000–158,000 Da) or a single-use plastic bag (Mn = 31,000 Da) into high-quality liquid products, such as lubricants and waxes, characterized by a narrow distribution of oligomeric chains, at 170 psi H2 and 300 °C under solvent-free conditions for reaction durations up to 96 h.

These liquids could be used in motor oil, lubricants or waxes or further processed to make ingredients for detergents and cosmetics. This contrasts commercially available catalysts, which generated lower quality products with many short hydrocarbons, limiting the products’ usefulness.

Hopefully, everyone can see that converting plastic bags into motor oil solves nothing! My car uses 320 times as much diesel as motor oil.

If, however, the products can be used as substitute feedstock for making 'virgin' plastic, then a proportional amount of fossil fuels have been saved, while eliminating a difficult waste fraction.

But what about 'dirty' plastic? Most plastic is polluted with either oils, food or other materials, such as paper/cardboard?

Motor Oil is only one of the many high-quality liquid polyolefin products that this process would be used.
From the article:
"Over 75% of materials produced each year, 300 Mt, are discarded after a single use. Currently, most of this waste is either lost to landfills and the environment, or inefficiently incinerated in power plants to produce electricity, generating greenhouse gases (e.g., CO2) and toxic byproducts in the process." And also,"Efficient technologies for extracting this value from discarded polymers would be equivalent to recovering about 3.5 billion barrels of oil ($175B at $50/barrel) each year and could create entirely new industries."

I wonder how much Pt it requires per ton of output...

A circular economy is essential for earth to survive.

I only reacted to the comment that motor oil could be generated.

As your quote also indicates, the problem with plastic is largely poor waste management, primarily in Asia (especially the Great Pacific Waste Patch).

On the face of it, the best possible use of recycled plastic is new plastic. The second best option is synthetic jet fuel, which is one of the few current uses of fossil fuels that cannot be substituted with batteries, or even hydrogen.

Jet planes depend so much on the properties of jet fuel (liquid in the whole range of operating pressure and temperature, very high energy density, both gravi- and volumetrically) that it is more efficient to accept a conversion loss from whatever feed stock, because it makes the plane so much more efficient.