A team in Russia has developed a novel and simple strategy to produce high-octane synthetic fuel based on low-octane gasoline Fischer-Tropsch product via new two-stage processes in Fischer-Tropsch synthesis involving isomerization of alkenes and a methoxylation process. A paper on their work is published in the journal Fuel. 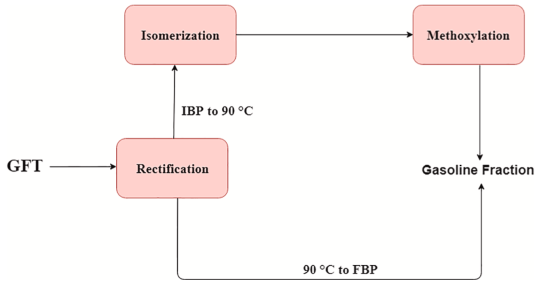 Flowchart for the processing of gasoline fraction of Fischer-Tropsch synthesis. Ershov et al.

In recent years, interest in the Fischer-Tropsch synthesis has increased significantly and thus it makes possible to produce synthetic motor fuels by using alternative energy resources as raw materials such as natural gas, coal, and biomass. The resulting product, which is commonly called synthetic crude oil, is a mixture of light and medium distillates with a boiling point of up to 350–360 °C. To obtain commercial gasoline from synthetic crude oil requires costly and multi-stage refining in the processes of hydrogenation, isomerization and reforming, which greatly complicates the entire chain of production of commercial gasoline. In addition, the industrial technology of upgrading the Fischer-Tropsch gasoline fraction (reducing the amount of olefinic hydrocarbons, as well as increasing detonation resistance) is a multistage process that exceeds the processing of straight-run gasoline obtained from petroleum feedstock in the number of stages.

In this regard, a significant resource base is unclaimed for economic reasons. The development of a fundamentally new technology for upgrading gasoline Fischer-Tropsch will ensure energy security and diversification of raw materials for the production of motor gasoline.

Isomerization is a standard gasoline upgrading process that improves the octane rating of straight run gasoline in a refinery; it converts straight-chain alkanes to branched-chain alkanes that can be blended in gasoline.

The researchers isomerized the Fischer-Tropsch gasoline fraction on zeolite, and then used the resulting product as a feed for the second stage: methoxylation.

The team carried out the methoxylation reaction using a six-fold excess of methanol based on the C4–C7 olefinic hydrocarbons contained in the feedstock. The researchers said that such a large excess is necessary to increase the conversion of olefins and also to suppress polymerization reactions that can occur under these conditions.

Chromatographic and gas chromatography-mass spectrometry analysis of the result confirmed the presence of esters from C4 to C7 with the prevalence of esters of C5 (TAME) and C6 in an amount of about 6% by weight.

… the resulting product at the final stage is sent to blend with a fraction of 90 °C to final boiling point. As a result of the application of the above processes, a decrease in the share of unsaturated hydrocarbons, worsening of the chemical stability of fuels, as well as being one of the causes of smog formation in large cities, are ensured. In addition, high-octane ethers appear in the composition of the fuel—oxygen-containing compounds—additionally improving the environmental characteristics of the hydrocarbon fraction.