Rio Tinto started the commissioning of industry-leading filter press technology at its Vaudreuil alumina refinery in Québec, Canada, six weeks ahead of plan and under its CAD $250-million budget. The new filter presses will deliver environmental benefits by moving the refinery to dry stacking of bauxite residue and extend the life of the operation, which supports 1,000 jobs in the Saguenay-Lac-St-Jean region. The presses will ramp up to being fully operational in early 2020.

Bauxite residue is a by-product of the Bayer Process—the principal means of refining bauxite to produce alumina (aluminum oxide). Bauxite, the most important ore of aluminum, contains only 30–60% aluminum oxide (Al2O3), the rest being a mixture of silica, various iron oxides, and titanium dioxide. The aluminium oxide must be purified before it can be refined to aluminium metal. 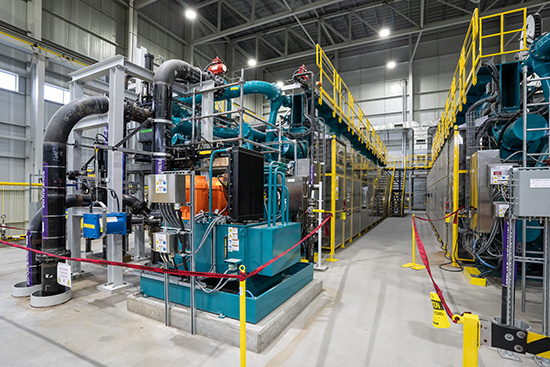 New filter presses such as this one will enable Rio Tinto to dry bauxite residues in only 17 minutes instead of the three years it takes currently.

Bauxite residue is primarily composed of the insoluble fraction of the bauxite ore that remains after extraction of the aluminum-containing components. Iron oxides (10 – 30%), titanium dioxide (2 – 15%), silicon oxide (5 – 20%) and undissolved alumina (0 – 20%) make up the residue, together with a wide range of other oxides which will vary according to the initial bauxite source.

The high concentration of iron compounds in the bauxite gives the by-product its characteristic red color—and its common name “Red Mud”.

Like most ores and soils, bauxite can contain trace quantities of metals such as arsenic, beryllium, cadmium, chromium, lead, manganese, mercury, nickel and naturally-occurring radioactive materials, such as thorium and uranium. Most of these trace elements remain with the residue after extraction of the alumina.

Initially, the residue is washed, to extract as much valuable caustic soda and dissolved alumina as possible. After washing, the residue is contained in special facilities known as Bauxite Residue Disposal Areas (BRDA) or Residue Storage Areas (RSA)—i.e., tailing ponds.

Industrial filtration consists in applying a mechanical pressure to dry bauxite residue, making it easier to store. Drum filters have been used since the 1930s but there is now increasing use of press filters capable of achieving 70 to 75% solids. The dry residue material is carried by truck or conveyor to the storage site and stored without further treatment.

Rio Tinto’s new presses will dry residue in only 17 minutes, instead of the three years it takes currently. Four 85-ton presses have been installed at the refinery using the latest in filter press technology.

The commissioning of this industry-leading filter press technology demonstrates Rio Tinto’s commitment to investing in the sustainability of its world-class assets here in Canada. Moving to dry stacking will benefit the local community and our operation by reducing the area needed to store bauxite residue and making the rehabilitation of the site easier.

The project was launched in February 2018 and has generated $120 million in economic benefits for local businesses, which played an important role in the procurement, engineering and construction efforts. At its peak, 330 people worked on construction of the site. With 98% of the work completed, the project has shown a strong safety record with zero injuries occurring so far.

A rare semi-major project completed on time and within budget. With another improved technology (and at an acceptable cost), residues could be further treated to extract remaining valuable elements.

This is the first thing I've seen which explains why titanium dioxide is so cheap; it's a byproduct of aluminum refining.

The large fraction of iron in the residue suggests that it might be worthwhile to recover it.  Not only would this be a new resource, it would reduce the mass and bulk so less would ultimately require disposal.

For once, I have to agree with SAEP. An improved circular economy would certainly reduce residues size while producing new products at a competitive cost?