A team from the University of Palermo and ICAR has developed an electric kinetic energy recovery system (e-KERS) for internal combustion engine vehicle (ICEVs) based on the use of a supercapacitor as energy storage, interfaced to a brushless machine through a power converter.

In a paper in the Journal of Power Sources, they report energy savings of the order of 20%, with a slight increase in vehicle weight (+2%) and with an overall commercial cost that would be compensated in 5 years due to the fuel economy improvement, to which corresponds an equal reduction of CO2 emissions. 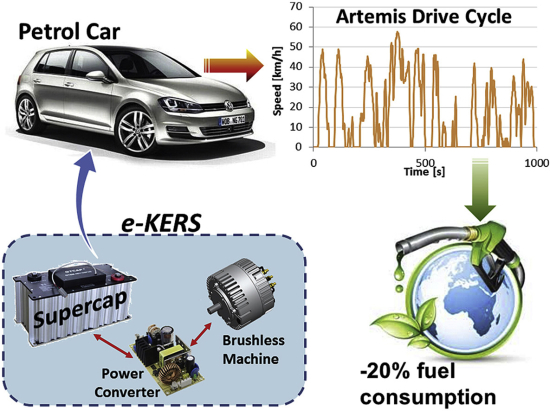 The researchers suggest that the low complexity of the system—never proposed for ICEV—the moderate weight of its components, and their availability on the market, make the solution ready for the introduction in current vehicle production.

The only kind of electric KERS currently studied and developed for internal combustion engine vehicles is represented by alternator-control KERS, which has been already introduced in the market by some car manufacturer (e.g., BMW Efficient Dynamics): with this kind of systems, the alternator output is increased during braking phases, thus transferring part of the vehicle kinetic energy to the battery, whose energy is employed to supply electrical consumers of the vehicle, reducing the power absorbed by the alternator during vehicle positive traction phases. The advantage of this system relies on its immediate applicability to current ICEV production, but, being realized with components not dedicated or optimized for KERS application, the fuel economy improvement is limited, ranging from 1% to 5%.

In the present paper, the authors propose an electric KERS (e-KERS) for internal combustion engine vehicles composed of a supercapacitors bank (SC), used as electric energy storage system, a motor-generator unit (MGU) to convert vehicle kinetic energy into electric energy and vice versa, and a power converter (PC), whose task is to manage the power transfer between SC and MGU. The system was conceived to recover the vehicle kinetic energy during braking phases by charging the supercapacitor, whose stored energy is employed by the MGU for the successive vehicle acceleration.

… Differently from any other electric KERS proposed for ICEV, the system proposed in this paper allows to use the recovered energy for vehicle acceleration, rather than for electric users supply, thus substantially increasing the amount of recycled energy.… Furthermore, differently from Formula 1 application, where the sizing of the KERS aims to maximize propulsion power, the guidelines followed in the present work aim to optimize the overall vehicle cost without causing a marked weight increase, thus allowing the power to be optimally managed during braking and acceleration phases.

The supercapacitors bank is electrically interfaced, by means of an expressly designed power converter (PC), to a motor-generator unit (MGU). The MGU is mechanically connected to the drive shaft via a fixed gear ratio and converts the vehicle kinetic energy into electric energy and vice versa.

Drivetrain layout of the vehicle with KERS.

20% isn't bad, but as long as there's a multi-geared transmission in the system it seems like a waste to fail to use it to step up the motor torque and allow the motor to be both downsized and made more efficient.  This would also improve energy recovery at lower speeds.

I'm sure 20% is just the beginning, as the abstracts do not offer any hint that the engine would be optimized to match.  A downsized, Millerized engine with an electric turbocharger would have too much turbo lag for stand-alone use, but with the supercap KERS to provide instant torque and rapid boost, both weight and losses could be reduced significantly.  If the supercap could be charged from the engine alternator, the on-tap energy could also be used to electrify the accessories such as A/C and power steering and reduce their parasitic drag.

All in all, replacing chemical batteries with high power-density supercaps will reduce demand for the scarce raw materials for the former and making it feasible to hybridize the vehicle fleet much faster.  And if there's anything we need, it's faster.