Researchers at Loughborough University have been awarded funding of £3.1 million (US$4 million) to help develop the next generation of electrified vehicle technologies by enhancing the virtual product development process.

The Loughborough University team, led by Dr Georgios Mavros, is to build on its existing mathematical modeling and simulation expertise to optimize vehicles in a virtual environment—removing the need for physical testing, improving cost-efficiency and the quality of the final product.

Simulation methods already exist but they’re underdeveloped for electric vehicles; we aim to take it to the next level. At the moment, there’s a lot of compromise in electric and hybrid vehicle development. For example, current simulation models of batteries and motors do not cover a sufficiently broad range of performance attributes to allow design optimization of the whole vehicle in a virtual environment.

We will create improved models and use large-scale simulations to look at the combined performance and interaction of many sub-systems—such as the battery, motor, brakes (conventional and regenerative), control systems, Advanced Driver Assistance Systems—and how they operate as parts of a whole vehicle, rather than examine them in isolation.

This approach will allow the design of more desirable electric vehicles with an increased range and better battery life.

As part of the three-year project, the University will look at electrifying the Ford Transit Van, which Dr Mavros says provides additional challenges due to the increased payload and the need for it to be able to travel long distances. 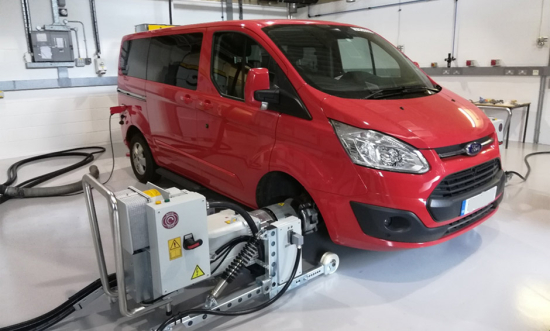 A Ford Transit Van “in-the-loop” with a simulation model running on a computer.

The team will use part of the funding to upgrade their existing equipment for testing electric vehicles and will install a new Vehicle-in-the-Loop (ViL) test facility that will allow researchers to test control algorithms on real vehicles.

Loughborough University received funding as the academic partner in the £39-million (US$50-million) Virtual Vehicle Integration and Development (ViVID) Project, funded by the Advanced Propulsion Centre through the APC 11 competition. The project is led by Ford Motor Company with McLaren Applied Technologies and IPG Automotive participating as industrial partners.

The main aims of the ViVID project are to remove the engineering prototype phase and enable significant CO2 reductions by increasing the number of electrified vehicles in commercial fleets.

$4mil? That's a lot of money. Good for you, guys! You better go someplace like this https://rocketpayz.com/de/spielautomaten-paypal/ and make more money out of it.

In fact, a fairly large amount of money was allocated for this, but the article was interesting to me, thanks.
Alex, web dev at casinority.com/au/

Glad to read this interesting post. Thanks for sharing. Anyone interested to get similar article then I suggest them visit Gaming Platform for gather more knowledge about it. Thank you.!

I would invest even more! Great article, easy to read. Thank you