MINI USA announced that the 2020 MINI Cooper SE battery-electric vehicle (earlier post) will reach US showrooms in early March of 2020 with a Manufacturer’s Suggested Retail Price (MSRP) of $29,900 plus an additional $850 Destination & Handling fee. 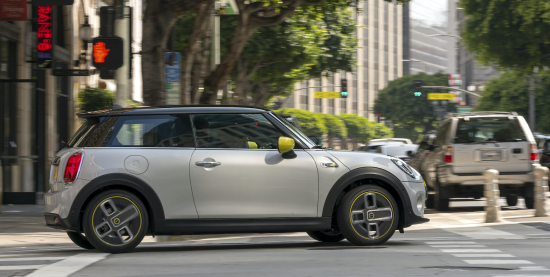 US pricing of the new MINI Cooper SE was set to establish this new battery electric as a true class leader in making premium electric mobility more accessible to a broader range of customers.

With a low center of gravity and dynamic handling, the MINI Cooper SE retains the fun-to-drive attributes of a MINI. The front-wheel drive electric motor generates 181 hp and 199 lb-ft of torque enabling the new MINI Cooper SE to go from 0 – 60 mph in 6.9 seconds and achieve a top speed of 93 mph.

The MINI Cooper SE comes standard with a two-mode regenerative braking system to help maximize the recharging of the battery while meeting personal driving style preferences.

The MINI Cooper SE comes standard with a base trim level that offers a full complement of premium features and equipment. Beyond the standard equipment, two additional trim levels will be offered giving customers the choice to easily add two bundled packages of premium equipment.

Based on, and dimensionally almost identical to the MINI Hardtop 2 Door launched in 2014, the MINI Cooper SE has been engineered to be electric. Modifications include a height increase of 18 mm (.7 inch) to accommodate floor-mounted battery packs and a new, more efficient HVAC heat pump to maximize range during colder weather.

Despite these modifications, the MINI Cooper SE has the same distinctive style and identical interior dimensions and cargo space as the internal combustion MINI Hardtop. It also includes a closed, uniquely styled grill for better aerodynamics.

The MINI Cooper SE come standard with a new Dynamic Digital Instrument Cluster which features a digital speedometer and graphic indications for Charge Level and Power Level, as well as scrollable data including remaining range and charging/charge level during charging. This puts essential EV operations and energy consumption data all in one convenient place.

The new MINI Cooper SE will go on sale early March 2020 at MINI dealers across the US.

battery capacity ?
32 kwH?
No mention of range.
As long as you have access to another car for long runs, you should be fine.
MINI should have a "car swap" service so if you want one for a long run over the weekend, you can arrange to swap it for an ICE Mini (which could be used) at low cost, say twice a year for up to 5 years.
For an additional payment, you could have the MINI guys go to your house and swap the car [ "valet car swap" ].
On the other hand, most couples or families would probably have access to another car anyway.

It is enough for most folks, and this, like about every EV out there, is a local commuter or errand runner car, a 2nd vehicle in a family who takes long trips in their mini-van as a lifestyle.

With a 30kWh battery and 50kW charging, this 2020 Mini Cooper SE matches the specs of the model year 2016 Nissan Leaf.

Although some of the above are a few thousand dollars more expensive, the added utility of a 200 mile car makes the expense well worthwhile.

I like the Mini’s styling, love that BMW revived the all-electric but it’s hard to get excited about a car you can only take to the edge of a metro area. In comparison, Tesla Model 3 is effortless to drive long distances.

A $5k premium for the Tesla Model 3 is only an additional $28 per month amortized over the 15 year life of the car before interest. The Tesla Model 3 will probably in fact have a much greater useful life, and much higher resale value.

That said, in states with healthy rebates, this will be a very low cost entry level (range) EV. Perfect for folks who don’t need to drive long distances. In 3 years, off-lease models will likely be very popular with high school and college students.

The 2020 Bolt has an EPA rating of 259 mile. Somehow, GM managed to get a 10% increase in energy from the same size and mass battery. So far, I have average 4.3 miles/kWhr with my 2019 Bolt but I will not see that today as the temperature has dropped to the low teens and will not break freezing today. A cold January day in late October.