Audi is introducing a plug-in hybrid version of its A8 L luxury sedan. The combination of plug-in hybrid drive and intelligent drive management allows distances of up to 46 kilometers (28.6 mi) (measured in accordance with WLTP) to be covered with electric drive alone. System power of 330 kW (449 PS) and system torque of 700 N·m (516.3 lb-ft) deliver impressive vehicle dynamics. 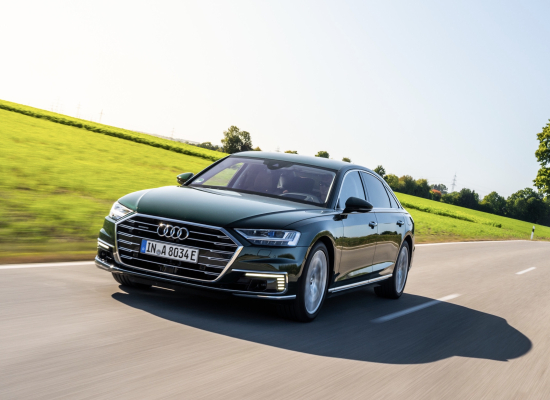 The A8 L variant of the new model, which measures 5.30 meters (17.4 ft) with its extended wheelbase, will be introduced to the European markets in the fall. The A8 as plug-in hybrid with normal wheelbase will be available a few weeks later.

A 3.0 TFSI generates propulsion in the A8 L 60 TFSI e quattro. The turbocharged V6 direct-injection engine with a gasoline particulate filter delivers an output of 250 kW (340 PS) and 500 N·m (368.8 lb-ft) of torque. It is certified according to the latest emission standard Euro 6d temp. A permanently excited synchronous machine (PSM) with a peak output of 100 kW and a peak torque of 350 N·m (258.1 lb-ft) serves as the electric drive.

The motor is integrated together with the clutch in the eight-gear tiptronic, which transmits the power to all four wheels via the quattro permanent all-wheel drive. 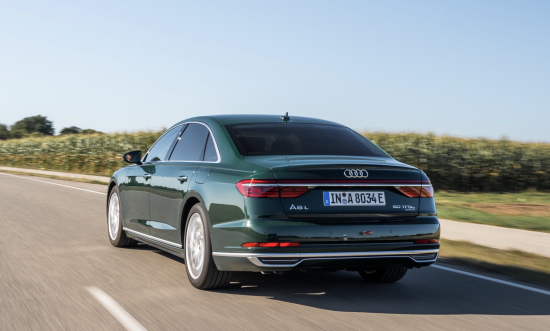 The power electronics converts the direct current from the high-voltage battery (HV) into three-phase current to power the electric motor. During recuperation, it functions as an alternator and feeds direct current back to the lithium-ion battery.

The battery is positioned underneath the luggage compartment floor and consists of 104 pouch cells which are allocated to eight modules. The HV battery stores 14.1 kWh of energy and delivers a voltage of 385 V.

Its cooling circuit is connected to both the coolant circuit for the air conditioning system and the low-temperature circuit, which also incorporates the electric motor and power electronics. In order to further increase energy efficiency, the standard four-zone deluxe automatic air conditioning works with the heat pump, which uses the waste heat of the high-voltage components.

The high system torque is available at 1,250 rpm—i.e., just above idle speed. When both motors work together in boost mode, the flagship accelerates from zero to 100 km/h (62.1 mph) in 4.9 seconds and reaches an electronically governed top speed of 250 km/h (155.3 mph).

Intelligent drive modes and the updated predictive efficiency assistant. The driving strategy of the plug-in hybrid drive is designed such that drivers of the A8 can cover a large section of their daily journeys on electric power.

The “EV” soft key in the lower of the two MMI displays allows them to decide whether and how they want to adjust the interaction of the two motors at any time. The luxury sedan with plug-in hybrid starts in “EV” mode, where it drives on purely electric power. The combustion engine is engaged only when the driver depresses the accelerator pedal beyond a specific resistance. The pressure point is variable and based on the power from the electric drive that is currently available.

“Hybrid” mode offers two operating modes: “Auto” and “Hold”. In “Auto” mode, the predictive operating strategy is activated automatically when route guidance is started in the MMI navigation plus (standard equipment). In addition, the battery charge is spread intelligently and optimally along the route, with large electric portions in the city and in stop-and-go traffic. Generally speaking, the predictive operating strategy endeavors to drive as far as possible on electric power and to use the available battery charge completely by the time the destination is reached.

“Hold” mode pursues a different strategy: Here, the available charge state of the battery is kept at the current level with just minimal fluctuations by means of recuperation and by shifting the load point, i.e. with targeted adjustments to the management of the 3.0 TFSI. Following a long-distance journey that is driven the conventional way, for example, this allows the subsequent urban drive to be covered on purely electric power, i.e. without emissions and nearly silent.

The operating strategy of the Audi A8 L 60 TFSI e quattro uses various pieces of data to plan the management of the drives. The main focus here is always on optimizing ride comfort and energy consumption, as well as keeping CO2 emissions to a minimum.

When it comes to planning long-distance journeys, the strategy takes the length and profile of the route as well as online traffic information and the driver’s driving style into account. In the short-term forecast, the standard predictive efficiency assist (PEA) system contributes information from the immediate environment taken from the navigation data, for example speed limits, types of roads and uphill and downhill gradients. The data from the camera and radar that monitor the traffic ahead is also included here.

The phases in which the driver takes the foot off the accelerator pedal are also important for the efficiency of the Audi A8 L 60 TFSI e quattro. The PEA takes over the regulation in such situations. In addition to the navigation data, it also takes the distance to the car in front into account and then decides between freewheeling with the engine switched off and coasting recuperation, i.e. the recovery of kinetic energy and its conversion into electric energy. The Audi flagship can recover up to 25 kW of power through coasting recuperation.

The electric motor also performs all light and medium brake operations up to 0.3 g, which make up more than 90% of all brake operations in everyday customer driving. It only works together with the hydraulic wheel brakes in case of heavier decelerations.

Thanks to sophisticated fine tuning, the transition, also known as “blending,” between the electric and hydraulic brakes is virtually imperceptible; the brake pedal can always be modulated precisely and provides good feedback. The Audi A8 L 60 TFSI e quattro achieves up to 80 kW of recuperation power while braking.

When the adaptive cruise control (ACC) is active, the PEA assists the driver not only with decelerating but also with fuel-efficient acceleration. If the ACC is switched off, the driver receives prompts that indicate when it would be sensible to take their foot off the right-hand pedal. The driver feels an impulse in the active accelerator pedal and sees information displayed in the Audi virtual cockpit (standard) and on the head-up display (optional). Detailed symbols, e.g. for intersections, town signs and traffic driving in front, explain the reason for the reduction in speed.

In the Audi virtual cockpit and on the display of the standard operating system MMI touch response, the driver can view a variety of information on electric driving: power meter, range and the current energy flows of the two drive units. As the central display element, the power meter provides information on the maximum electric performance as well as coasting or braking recuperation, for example.

In addition to the “EV” soft key, the driver of the A8 L 60 TFSI e quattro has a second way of influencing the ride character: the Audi drive select system. With the “comfort,” “efficiency,” “auto,” and “dynamic” modes, the driver can select the setup of the drive, air suspension and steering. Depending on the settings, the way in which the drives work together changes when the driver depresses the accelerator pedal.

When the selector lever is in position “S,” the electric motor assists the 3.0 TFSI with a very pronounced boost function to increase dynamics and agility. In this case, freewheeling in overrun mode is blocked; the electric motor thus recuperates whenever the foot is taken off the right-hand pedal.

Acoustic vehicle alerting system. .The Audi A8 L 60 TFSI e quattro is equipped with a synthetic e-sound as standard to alert pedestrians and cyclists in city traffic. In accordance with the EU guidelines, the acoustic vehicle alerting system (AVAS) can be heard clearly up to 20 km/h (12.4 mph) and gradually fades out as the speed increases. The sound is generated by a small electronics box and output by a loudspeaker in the right wheel arch.

With a connection to a voltage of 400 V and a current of 16 A, it takes around two-and-a-half hours to fully charge the battery with a maximum output of 7.4 kW. With a domestic power socket with 230 V/10 A, an empty high-voltage battery can be fully charged with 2.3 kW in around six-and-a-half hours.

Audi customers in Germany can supply their homes with Volkswagen Naturstrom, which is generated without CO2 emissions and from 100% renewable energy sources. Convenient recharging is also possible on the road. The proprietary Audi e-tron Charging Service provides access to more than 110,000 charging points in Europe. A single card is sufficient to start the procedure, regardless of the provider.