Weathernews and Toyota Motor began a verification test in Tokyo, Osaka, and Aichi on 1 November 2019 in which the conditions of roads and their surroundings are ascertained using the operating status of windshield wipers, as well as weather data. This is part of a joint research effort to increase the accuracy of weather observation and forecasts, and improve driver safety using Weathernews’ weather data and the vehicle data obtained from Toyota’s connected vehicles. 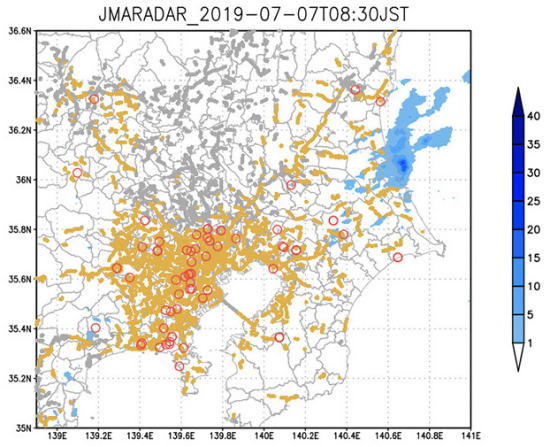 In this verification test, the wiper operating status of Toyota’s connected vehicles being driven in the designated regions is visualized as a map and compared with actual weather data. Because wiper operating status typically corresponds to the presence or absence of precipitation, using wiper data has the potential to allow detection of precipitation that cannot be detected by standard raincloud radar.

In the verification test, the relationship between the wiper data and weather data will be analyzed in detail, with the aim of detecting phenomena that could affect wiper operation in addition to detecting precipitation.

With the launch of the Crown and Corolla Sport in June of last year, Toyota has begun a full-scale rollout of connected vehicles, and going forward, nearly all passenger cars that are launched in Japan will have an on-board DCM (Data Communication Module).

In addition to its own observation network at approximately 13,000 locations nationwide, Weathernews makes use of 180,000 weather reports a day from users to provide highly accurate weather forecasts.

Through this joint research project, both companies will provide weather data and the vehicle data obtained from connected vehicles as information “that is useful during emergencies” on a broad basis, with the goal of contributing to improved driver safety.

A comparison by Metropolitan Expressway Company of the number of accidents on sunny and rainy days found that the rate of accidents during rainy weather is four times that of sunny days, so the presence of precipitation has a large effect on safe driving for vehicles. However, raincloud radar, which is often used to detect and predict rainy areas, has the disadvantage of being unable to detect rain resulting from rainclouds in the lower layer of the troposphere (an altitude of 2 km or below) or small raindrops such as those that form during drizzles. In such cases, it has been difficult to accurately determine areas where it is raining.

In the verification test, the wiper operating status of Toyota’s connected vehicles being driven in the designated regions is visualized as a map and compared with actual weather data. In past cases where low rainclouds produced rain that did not show up on raincloud radar in the Kanto area, rain was instead reported by users of the “Weathernews” app.

The user reports received matched closely with the areas where wipers were being operated, showing that wiper data can detect rain that cannot be detected using raincloud radar. The partners will also perform a detailed analysis of the relationship between the wiper data and weather data, and in addition to accurate detection of rainy areas, we plan to make efforts to estimate the strength of the precipitation based on the power at which the wipers are being operated, and consider using wiper data for weather forecasting.