Fischer-Tropsch (F-T) synthesis converts syngas to liquid fuels. However, the reaction products of traditional F-T synthesis follow the Anderson-Schulz-Flory (ASF) distribution law, and the resulting carbon number distribution is wide and complex with a high content of heavy hydrocarbons. This makes it difficult to concentrate the carbon number of liquid hydrocarbons to within a specific range.

A team at Zhejiang University in China has investigated the influence of rare-earth metal ions promotion on the F-T synthesis of gasoline-range hydrocarbons (GRHs, C5–C12 hydrocarbons). In a paper in the journal Fuel, they report that a Co/Y-β catalyst exhibited optimal GRHs selectivity of 49% with a yield of 41.4% at 260 °C, 2 MPa, H2/CO = 2, and 1,064 h−1. 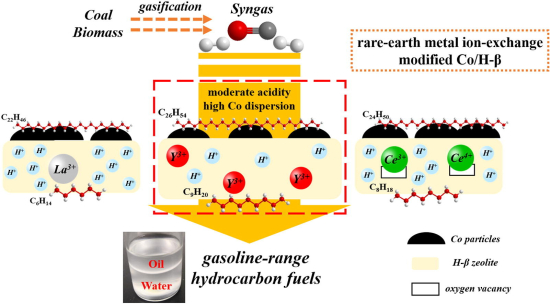 To increase the proportion of gasoline-range hydrocarbons (GRHs) from F-T synthesis, some researchers have regulated the structures and properties of catalysts by introducing supports rich in acid sites or adding metal promoters to enhance the in situ hydrocracking reaction of long-carbon-chain hydrocarbons and the isomerization of linear hydrocarbons.

In recent years, the use of bifunctional catalysts combining acidic zeolites with active components has become a promising means of achieving selective F-T synthesis. … H-β zeolite has been widely utilized in selective F-T synthesis as it shows high cracking activity and selectivity for middle distillates on account of its distinct pore structure and acidity. … Many researchers have found that the introduction of a small amount of a rare-earth metal in conventional F-T synthesis catalysts can promote the degree of reduction, catalytic performance and lifetime.

… In this study, H-β acidic zeolite has been modified by these typical rare-earth metal ions (Y3+, Ce3+ and La3+), prior to the introduction of cobalt nanoparticles by a wet-impregnation method. The resultant Co-based catalysts have been applied for selective F-T synthesis to study the influence of modification with these cations on the structure and physicochemical properties. Moreover, the effect of different rare-earth ion-exchange modifications on the catalytic activity and products of F-T synthesis are discussed to gain insight into how the selectivity for the target products might be improved.

The researchers found that the modification of Y3+ and Ce3+ on Co/H-β enhanced the activity and stability of the catalyst. Additionally, modification with rare-earth metal ions enhanced the strength of the CO-metal bond while weakening that of C-O bond, leading to an increase in selectivity for GRHs and stability.

The doping of Y promoted the dispersion of active Co particles, and the addition of Ce3+ strengthened the reducibility of Co/H-β, thus facilitating the conversion of CO.

We hope that this work will be helpful for further researches on the efficient regulation of selective F-T synthesis for more GRHs, as well as in-depth understanding of the effect of unique ion-exchange modified methods on the structure and physicochemical properties of the modified catalysts.

Use MTG, you get gasoline.

@SJC
Yeah, but if you already have methanol you can use that in your car or blend it in gasoline. They already do that in China. Or, at least did..., the last time I visited China.

The US petroleum industry does not want methanol in motor fuel, despite previous successful trials of M85.  MeOH is not on the list of permissible blending components.  Fiat's trial of A20 fuel should be a model for the world, but until the rules are changed it can't happen here.

MTG takes syn gas to methanol to DME to gasoline in one process.

MTG is lossy, and gasoline is an inferior motor fuel in a number of ways.  It was only adopted in the first place because it was a byproduct of kerosene production and going to waste aside from a small amount sold for cleaning fluid.

The overall energy efficiency of the MTG process including processing energy is high,
about 92-93%...
https://www.coursehero.com/file/p22ir4m/The-overall-energy-efficiency-of-the-MTG-process-including-processing-energy-is/

And it yields a fuel with inferior octane and lower flame speed, so it cannot be used in high-compression engines and yields less of its heat of combustion at the crankshaft.

If we're going to get away from fossil fuels, we need to make certain that they can't be sneaked into the fuel for advanced vehicles.  Adopting alcohols, including MeOH, as the exclusive fuel supply for new vehicles going forward while allowing any excess to be blended into the legacy supply, but not the other way around, will be key to making it happen.

@SJC
Why didn't you put in a full quote from the source you cite?

It says: "...However, if one includes the thermal efficiency for the methanol synthesis process from natural gas (~60%), then the overall energy efficiency (natural gas to gasoline) is about 50-60%."

Even if I have seen higher numbers for efficiency from natural gas to methanol, the total efficiency is still very low.