Researchers at the US Department of Energy’s (DOE) Argonne National Laboratory have reported that a new photo-excitation mechanism can speed up the charging of lithium-ion batteries by a factor of two or more. An open-access paper on their work appears in Nature Communications.

A serious limitation [of lithium-ion batteries], however, is the slow charging rate used to obtain the full capacity. Thus far, there have been no ways to increase the charging rate without losses in energy density and electrochemical performance. Here we show that the charging rate of a cathode can be dramatically increased via interaction with white light.

We find that a direct exposure of light to an operating LiMn2O4 cathode during charging leads to a remarkable lowering of the battery charging time by a factor of two or more. This enhancement is enabled by the induction of a microsecond long-lived charge separated state, consisting of Mn4+ (hole) plus electron. This results in more oxidized metal centers and ejected lithium ions are created under light and with voltage bias. We anticipate that this discovery could pave the way to the development of new fast recharging battery technologies. 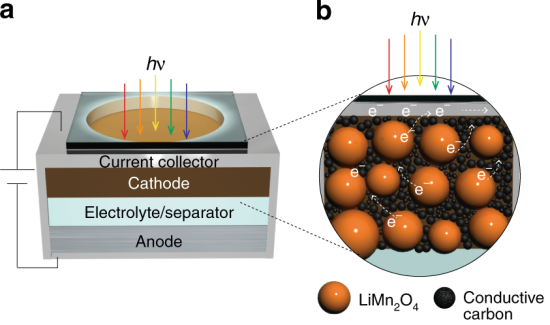 The principle of a photo-accelerated lithium-ion battery cell. The cell consists of a transparent window, current collector, cathode, electrolyte, separator, and anode. The broadband white light is used with an IR filter to avoid undesired heating of the cell. b Magnified view of the composite LMO cathode consisting of a Teflon binder, (e.g. –(CF2)n–), carbon particles as conductive diluent (e.g. acetylene carbon black), and active oxide powder. Lee et al.

Today’s lithium-ion batteries work in a dark state, with the electrodes housed in a case. Argonne’s photo-assisted technology would use a transparent container that allows concentrated light to illuminate the battery electrodes during charging.

To probe the charge process, the research team crafted lithium-ion coin cells with transparent quartz windows. They then tested these cells with and without white light shining through the window onto the lithium manganese oxide (LMO) cathode.

The key ingredient in this favorable reaction is the interplay of light with LMO, a semiconducting material known to interact with light. While absorbing the photons in the light during charging, the element manganese in the LMO changes its charge state from trivalent to tetravalent (Mn3+ to Mn4+). In response, lithium ions eject faster from the cathode than would occur without the photon-excitation process.

This condition drives the battery reaction faster. The team found that the faster reaction resulted in faster charging without degrading battery performance or cycle life.

The research team performed this work as part of the Center for Electrochemical Energy Science (CEES), a DOE Energy Frontier Research Center (EFRC) led by Argonne.

This finding is the first of its kind whereby light and battery technologies are merged, and this intersection bodes well for the future of innovative charging concepts for batteries.

The Vehicle Technologies Office of the DOE Office of Energy Efficiency and Renewable Energy has identified fast charge as a critical challenge in ensuring mass adoption of electric vehicles with a goal of 15-minute recharge time.

This research was funded by the DOE Office of Basic Energy Sciences and performed, in part, at the Center for Nanoscale Materials, a US Department of Energy Office of Science User Facility.

This is interesting, but do LMO cathodes have the energy density needed to be good BEV batteries?

High charging rate is more important for HEVs and PHEVs.  If the LMO cathode can be paired with a monochromatic light source of the right wavelength, it might be possible to get faster charging and better regenerative braking from the same battery.

It strikes me that the surface area of a battery is not very large, especially when you pack them up to fit into a car.
You might have to build LEDs into the battery or cells which sounds complicated.
No mention of how intense the light should be.
How far into the cathode can you shine the light ?
Still, an interesting idea - faster charging is good, and increasing cell life is also good, especially for grid storage.

LION Smart developed a “LIGHT Battery” concept that uses infrared communication to replace complex sensor wiring in the battery. Check this video also.
Though this is not exactly what ANL experiment involved (it used broadband white light, too). The point is we could embed light deep with the battery possibly using fiber optics for both sensor functions and faster charging.

This could be useful for solar with storage.
Put the cathodes behind the cells and charge 8 hours worth of storage in 4.

If you have something to say, say it, don't be a coward.

You don't need photonic acceleration to charge in 8 hours (and I doubt the IR photons which make it through PV cells have enough energy to activate LMO anyway).  You need it for charging in minutes, or even seconds as hybrid vehicles under braking.