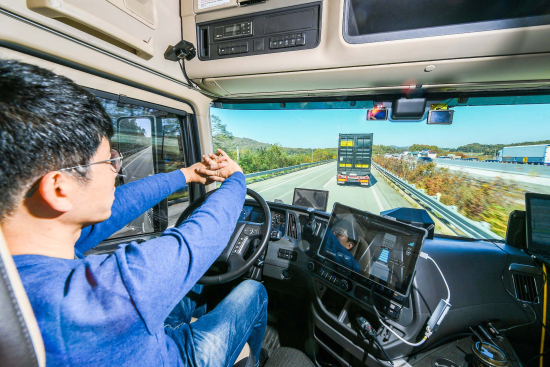 Yeoju Smart Highway is a 7.7km testbed within the central region expressway established by the Korean government for the development of autonomous driving technology. The highway is constantly populated by vehicles for autonomous driving research, making it quite similar to the conditions of an actual highway.

The demonstration successfully displayed the following: Vehicle platooning; cut-in/out by other vehicles; simultaneous emergency braking; and V2V (Vehicle to Vehicle) communication technology. The speed limit was set at 60 km/h to ensure safety.

The demonstration was part of a project initiated by the Ministry of Land, Infrastructure and Transport (MOLIT). Since 2018, MOLIT has been working to support pioneering efforts for autonomous technology. Along with Hyundai Motor Company, this national project involved government, corporations, and academia.

Vehicle platooning has the benefit of reducing air resistance to improve fuel efficiency and lower emissions, making it an eco-friendly technology.

The platooning maneuver begins when the driver of the following truck approaches the leading vehicle and activates platooning mode. 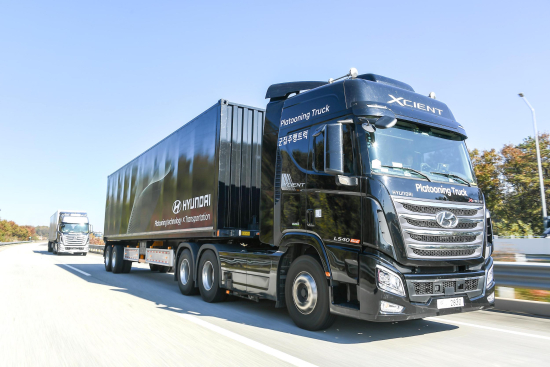 Upon activation of platooning mode, the following truck maintains a 16.7m distance, with real-time fine tuning based on the leading vehicle’s acceleration and deceleration. The driver does not need to put his/her foot on the accelerator nor brakes, vastly reducing fatigue on the road and improving safety.

The mode also activates lane keeping technology which makes possible for the driver of following truck to take hands off the steering wheel.

With platooning, other vehicles cutting in and out between trucks can also be seamlessly managed. If a vehicle cuts between the platooning trucks, the following truck automatically extends the gap to minimum of 25m.

When a leading truck makes a sudden emergency stop due to an unexpected situation, the newly demonstrated technology responds by enabling the following truck to decelerate and stop.

The V2V system applied to both trucks in this demonstration showcased how real time information sharing between platooning vehicles can improve control over acceleration and deceleration, and also incorporate ADAS (Advanced Driver Assistance System) information from various sensors such as cameras and radar.

Furthermore, the Real-time Frontal Video Sharing feature was enabled by V2V technology. By displaying videos from the leading vehicle, the following driver can see the road ahead, solving limitations of forward vision for trailing drivers.

Hyundai Motor will strive to achieve high-level platooning technology which will work under even tighter following distance between vehicles and also implement traffic information for optimized travel in the future.

The Hyundai Xcient is 40 ton truck sold across the globe. Hyundai is also spearheading eco-friendly movement in the commercial vehicles sector with the Xcient Fuel Cell truck unveiled last September. The company plans to deliver 1,600 fuel cell vehicles to Switzerland by 2025.

I don’t know why semi platooning hasn’t been a bigger thing with the savings in driver cost easily exceeding the savings in fuel costs. This would seem to be low hanging fruit for any company in the FAV game. Looks like my 2017 prediction that this would be live in 2020 isn’t going to happen.