The majority of vehicle buyers are older than 54

In this analysis, I compare the age composition of buyers of new light-duty vehicles (cars and light trucks) in 2007 and 2017. The data for 2007 came from IHS Markit and they apply to the buyers during the calendar year, while the data for 2017 were calculated from the information published by Wards Intelligence and they apply to the buyers of the model-year vehicles. (The original source of the latter information was, in part, J.D. Power and Associates.) The results are shown in the table below. 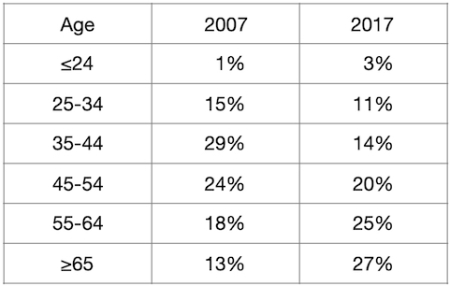 The main findings are as follows:

If you split young people into urban / rural and with / without children, it should be obvious that the people who need cars are rural and with children. Not many people under 24 will have children, and those who do, or live in the country and need a car, buy secondhand.
After that, they need to buy a house (or rent one) so that soaks up their money from 25 - 44.
Only then, do they have the cash to consider new cars.

FFS, I cannot get a simple comment about 2007 financial shenanigans past the filters today.

Our lizard overlords are blocking it.

They'll be out later tonight to do a mind wipe.

Paraphrasing:  back then, rising prices seemed to have no top and lenders handed out cash like candy figuring that equity would appear like magic to put the paper in the black.  A lot of that cash probably went into vehicles.

And then came the top, and it all evaporated.

Look at Pick Up Trucks. That's were you can say in 2007 you could buy a new truck for $35,000. Today, that same truck goes for $62,000. Older people have the money to spend were younger people won't spend that much for a truck. You want a top of the line truck? $75,000 to $85,000. Who can afford these ridiculous prices, and now the manufacturers are going to cut out most car models and only build SUVS ( American Auto Makers ).