The assembly is mounted on the engine and directly transfers evaporated fuel emissions from the evaporative emission control (EVAP) system into the engine, which maintains the low level of vehicle emissions as well as improving engine efficiency. 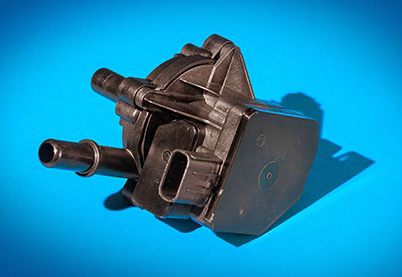 We worked with GM to get this part ready for the Cadillac XT4. The design is a major achievement for emissions reduction as it enables a leak-proof seal for gasoline vapors.

This design incorporates some enhancements such as an integrated pressure sensor that provides real-time performance feedback to the vehicle and also includes the addition of a purge pump that enables the OEM to perform more complex leak diagnostic checks on the EVAP system.

This can be scaled easily to other OEMs, mitigating gasoline vapor emissions from millions of vehicles.

This design is a major achievement for emission reduction. The use of BASF’s Ultramid polyamide 6 and 66 grades were crucial to enabling a leak-proof seal for gasoline vapors. This allows the system to function in a corrosive environment.

The application also made it to the finals of the SPE’s Automotive Innovation Awards program, the oldest and largest competition of its kind in the automotive and plastics industries.