Researchers at Fraunhofer IFAM have developed a casting technique that can be used to produce lightweight aluminum windings with a higher groove fill factor to replace copper windings in electric motors. In one study, they found that the aluminum coils increase the continuous output of the electrical machines compared to the copper windings, reduce the operating temperature and at the same time save weight and raw material costs.

After having already successfully made aluminum coils in precision casting in recent years, it was an obvious goal for the department Foundry Technology and Lightweight Construction at the Fraunhofer Institute for Manufacturing Technology and Applied Materials IFAM also to produce the coils for series production in die casting.

Cast coils are characterized by a flat conductor arrangement, which leads to a higher slot fill factor and thus to a better utilization of the available installation space. 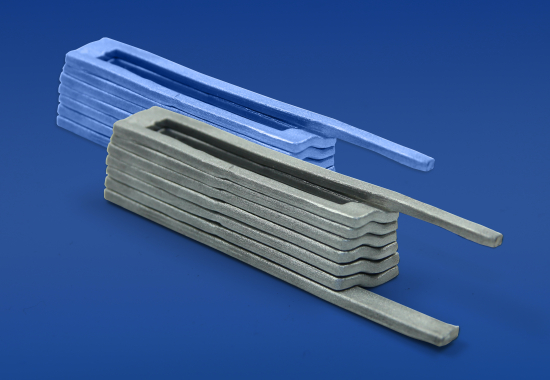 Although the cast aluminum coils have a higher electrical resistance relative to the wound copper coils, the larger cross-section results in less resistance with respect to the entire coil.

Due to the better connection to the laminated core and more favorable utilization of the installation space results in a much better thermal and electromagnetic behavior. For this reason, it is possible to replace wound copper coils with cast aluminum coils for improved performance and lower material costs.

To show this in a direct comparison, the Fraunhofer team used 250W commercial pedelec motors. Rebuilt engines with different laminated cores and coil combinations were tested on a bench.

Among the results with the aluminum windings:

The aluminum coil can deliver the resulting heat better to the laminated core and thus to the environment. This results in an improved continuous performance, since the coils only reach the permissible continuous operating temperature at higher currents.

Even more advantageous were the measurement results for a laminated core optimized on the cast coils in another modified pedelec motor. At lower weight, the torque increased by almost 80% and the continuous power by 25% compared to the original engine. Design changes can further increase the performance of aluminum coil motors.

I know that copper is more expensive and heavier than aluminum but principally those coils could be cast in copper as well. That would lower the resistance of the coils and achieve the same advantages of optimizing available space and increase the efficiency even more so.

Square wire is already in use in some motors, precisely to improve the packing factor.  It's been the subject of previous GCC posts.

If you go to the Fraunhofer IFAM web site (https://www.ifam.fraunhofer.de/content/dam/ifam/en/documents/Shaping_Functional_Materials/casting_technology/castings-for-electric-drives-fraunhofer-ifam.pdf) it is clear that they already have developed a process for casting copper coils. Presumably these coils have higher performance than the aluminum ones, but there may be economic reasons for preferring the aluminum variety.

Does cast metal have lower resistance than drawn or rolled metal?  I know the grain structures can be radically different and in rolled metal it is anisotropic.

"Does cast metal have lower resistance than drawn or rolled metal?"
Not that I know of. The only deviation I know applies to HF waveguides. At high frequencies the "skin effect" occurs; the electron density moves towards the surface of the conductor. That is why waveguides are hollow akin to piping.