In addition to an ability to do 0-60 mph in a projected 5.8 seconds—the second quickest acceleration time in the Toyota lineup—the 2021 RAV4 Prime has an estimated 39 miles of all-electric range—the highest AER of any PHEV SUV on the market. The RAV4 Prime also has a manufacturer-estimated 90 combined MPGe. The Toyota RAV4 Prime will come to market in summer 2020. 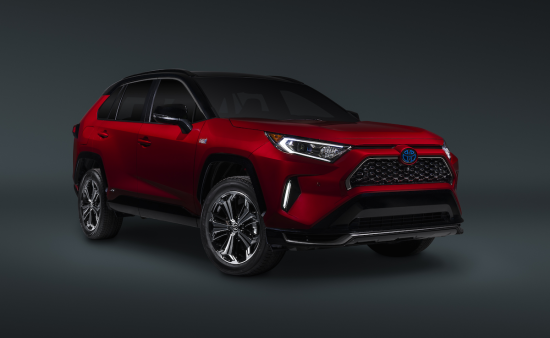 The 2021 RAV4 Prime will be available in SE and XSE grades, both emphasizing athletic on-road performance and premium comfort and style. With its plug-in hybrid technology advancing, Toyota sees such vehicles as critical to an overall electrification strategy that will also include standard hybrids and battery electric vehicles (BEVs), along with fuel cell electric vehicles (FCEVs) such as the second-generation Mirai unveiled in October.

The Toyota RAV4 Prime builds on the RAV4 Hybrid. With more powerful motor-generators, a newly developed high-capacity Lithium-Ion battery and a booster converter, the 2021 RAV4 Prime yields an 83-horsepower (hp) jump in total system output over the RAV4 Hybrid and has the most horsepower in its segment.

Toyota projects 0-60 mph acceleration in 5.8 seconds which is quicker than the RAV4 Hybrid (7.8 sec.) and in a league with luxury/performance SUVs that come nowhere near this Toyota’s fuel economy. Notably, the RAV4 Prime uses regular-grade gasoline.

The RAV4 Prime uses a differently tuned version of the RAV4 Hybrid’s 2.5-liter four-cylinder Atkinson-cycle gasoline engine. It produces the same projected 176 hp as in the hybrid, but paired with the electric motors, total system output equals 302 horsepower.

The RAV4 Prime’s passenger space isn’t compromised by the larger Lithium-Ion battery, as it is mounted under the floor. The mounting position also gives the RAV4 Prime a low center of gravity and enhanced driving stability.

The RAV4 Prime employs the same version of Electronic On-Demand All-Wheel Drive (AWD) as the RAV4 Hybrid. In both models, a separate rear-mounted electric motor powers the rear wheels when needed, including proactively on acceleration startup and also in reduced-traction conditions.

The AWD system also reduces understeer during cornering for enhanced steering stability. Off-pavement, AWD enhances hill-climbing performance. A driver-selectable Trail mode makes it possible to get unstuck by braking a spinning wheel and sending torque to the grounding wheel.

With available paddle shifters, the driver can “downshift” to increase the regenerative braking in steps, which fosters greater control when driving in hilly areas, for example.

As on the RAV4 Hybrid, the innovative Predictive Efficient Drive feature acts like an invisible “hyper-miler” co-driver. Using the available navigation system, Predictive Efficient Drive essentially reads the road and learns driver patterns to optimize hybrid battery charging and discharging operations based on driving conditions. The system accumulates data as the vehicle is driven and “remembers” road features such as hills and stoplights and adjusts the hybrid powertrain operation to maximize efficiency.

Starting with the 2020 model year, every Toyota Hybrid Battery Warranty has been increased from 8 years or 100,000 miles to 10 years from original date of first use, or 150,000 miles, whichever comes first.

Looks nice, but nothing on MSRP.

Pretty impressive achievement, but is anyone looking for that kind of acceleration in this kind of car? I wish they would offer a vehicle with all those extra things not included so I could save the weight, be rid of the complexity, and not have to pay for stuff I never use.
After age 40 a car is mostly an appliance that you don't want trouble from. Toyota is doing amazing things with efficiency and reliability..... that's all I want.

Good point, TLJ. I was about to say those points. I'm still waiting for the likes of the hybrid trim of the Camry or Avalon having a lift-back for more luggage capacity and more versatile cargo handling. The specs of this RAV4 Prime are all good, but I just don't like the boxy appearance, and the low aerodynamic efficiency that will really show up when you are trying to keep up with interstate traffic traveling at 80 mph.

On the other hand, the current Prius looks very sleek and very aerodynamic, but it is a tad on the small size, and especially with anemic power of merely 121 hp. Toyota should be planning on applying the existing 180-hp hybrid power train of the hybrid Corolla 2,0 liter to the Prius chassis to relieve the anemic performance of the Prius and to regain lost market share.
A Camry hybrid or Avalon hybrid with the lift-back design and high aerodynamic efficiency like the Prius would be PERFECT.

They upped the battery capacity to give longer AER.

That pretty much automatically ups the power available, so the acceleration is more or less a freebie.

TLJ and Roger. The problem with plug-in hybrids is power that is available when in EV mode, when you have charge in the battery you don't wan't gas engine to kick in, even if you do an overtake or you are merging on the highway. So then when you have 100+ kW of power in EV mode this is nothing special, it's like a normal car territory. But in hybrid mode you still have this additional 100 kW EV boost, so it's only logical to use it.