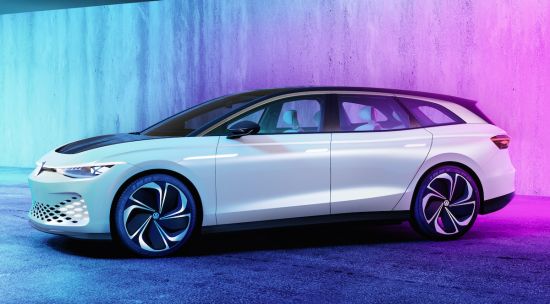 With an 82 kWh battery and a low drag coefficient of 0.24, the vehicle has a range of 590 kilometers (367 miles) on the WLTP cycle and a predicted range of up to 300 miles (483 km) on the EPA cycle. The ID. SPACE VIZZION previews a potential production car for Europe and North America.

The concept car is manufactured on Volkswagen’s modular electric drive matrix (MEB), as are all ID. family models. This creates an entirely new package as the electric drive components are extremely compact and the battery is integrated into the vehicle floor to save space, making it possible to alter a vehicle’s overall architecture.

The concept car is fitted with a rear-mounted, 275 hp motor, but a second motor could be fitted to give all-wheel-drive capability and a total output of 355 hp. The ID. SPACE VIZZION is 195.2 inches long, 60.2 inches high, and 74.7 inches wide. 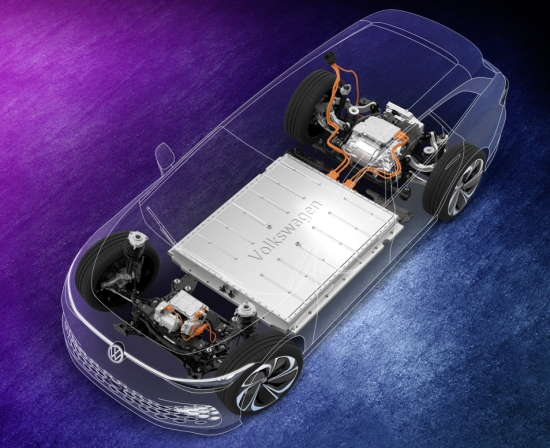 The ID. SPACE VIZZION exhibited in Los Angeles is powered by a 275 hp rear- mounted electric motor. An 82 kWh lithium-ion battery supplies power to the electric drive motor. Power electronics on the front and rear axle control the flow of high-voltage energy between the motor and the battery. The on-board electronics are supplied with 12 volts via a DC/DC converter.

Near ideal weight distribution (approaching 50:50) is achieved with the MEB architecture, which results in extremely dynamic and safe handling. The fully redeveloped running gear also has a significant influence on this, featuring electronic damping control, a multi-link rear suspension, and a strut-type front suspension.

The 4Motion version of the ID. SPACE VIZZION sprints to 60 mph from rest in just 5.0 seconds and the maximum speed is electronically limited to 109 mph.

Aerodynamics. Since electric vehicles don’t need a radiator or space for an engine, this creates new design freedom. In the case of the ID. SPACE VIZZION, the designers and engineers have taken advantage of this freedom to optimize the aerodynamics and thus increase the efficiency and range. Air flows under a horizontal panel between the headlights and over the extremely low hood, before being directed to the rear, where there is another horizontal panel over the tailgate that allows air to flow under it.

The air also flows into ducts in the front bumper, where it is also directed rearwards. The vents in the bumper and the hood panel have been designed as functional features, but are also unique design elements.

The extra focus on the aerodynamics also influences the design of the vehicle’s side panels. There are no conventional door handles to interrupt the airflow. Instead, the ID. SPACE VIZZION features illuminated touch surfaces which light up as soon as the car’s Keyless Advanced function detects someone approaching with a vehicle key or a synchronized mobile key on a smartphone. When the person makes contact with the touch-activated surface, the light pulsates, the touch pad vibrates, and the door opens.

Form and function also create an aerodynamic alliance at the rear of the vehicle. One of the dominant elements is the roof spoiler, which spans the roof like a bridge and opens out at the bottom, allowing the air to flow both above and below the spoiler. This layout reduces turbulence and optimizes airflow.

The roof spoiler, spoiler lip and diffuser work together to reduce turbulence at the rear end and help to optimize the vehicle’s range.

All-digital cockpit. Volkswagen’s ID. SPACE VIZZION features an all-digital cockpit. The straightforward logic of the controls is reflected in the new lightness of the interior design. You can create a bespoke visual appearance in the interior using ambient lighting with a spectrum of 30 colors. For the first time, individual colors can be assigned to touch-activated surfaces in the central infotainment system for functions such as media or phone. Natural voice control is another important tool for operating the vehicle.

The new multifunction steering wheel is equipped with capacitive touch panels. The right-hand steering column switch now becomes a shift lever. It is easier and more intuitive than ever before—turn the switch one notch forward out of the neutral position (N) to activate drive mode (D); turn it again to activate energy recovery mode (B); Park (P including parking brake) is activated by pressing the side of the steering column switch.

Because the gearshift function is now on the right, the windshield wiper function migrates to the left-hand steering column switch for the first time in a Volkswagen.

The driver automatically and intuitively takes key information from the ID. Light—an interactive light strip between the A-pillars. The ID. Light also provides the vehicle with a way to give feedback, by greeting the driver upon entry (welcome scenario); indicating that the electric motors are operational; saying goodbye when the driver leaves the vehicle (goodbye sequence); interacting visually with voice control to help the driver; and displaying important information from the assistance systems in the driver’s peripheral vision. Different colors are used depending on the function.

The ID. Light highlights the instructions issued by driver assistance systems and navigation, provides information on the battery charge level, and notifies the driver of brake prompts or incoming telephone calls. For example, in navigation, the ID. Light flashes to recommend that you change lanes, and the system can also warn the driver if their car is in the wrong lane. With voice control, the driver and front passenger receive voice feedback in the form of a light signal. The light indicates whether the voice control assistant is responding to the driver or the front passenger. Colors are also used in line with intuitive perception—green indicates a fully charged battery while red is used for braking prompts.

The ID. SPACE VIZZON recognizes the driver on the basis of the vehicle key or mobile key and adjusts to his or her settings before heading off. The driver can go to a central home screen to set up personalized touch-activated fields (tiles) on three different levels and use these to control all the infotainment system functions. The color spectrum of the infotainment system also changes according to the selected background lighting color. If the ID. SPACE VIZZION detects a stressful situation, such as rush hour traffic jams, the system suggests switching to a relaxation mode in which a calming ambient lighting shade is activated.

The new ID. SPACE VIZZION comes with Smart Climate, which is now fitted as standard in the new Golf. The user can simply say “fresh air” or touch a corresponding touch- activated surface to get a fresh breeze blowing through the interior. Other default Smart Climate settings include “cool quickly”, “cool feet”, “warm feet”, “warm hands”, “defrost the windshield” and “quick heating.” The ventilation system can also be controlled via touchscreen.