Data compiled by Euromonitor for European research and campaign group Transport & Environment (T&E) shows a surge in the number of Uber drivers (officially registered as private hire vehicles - PHV) in the past few years. 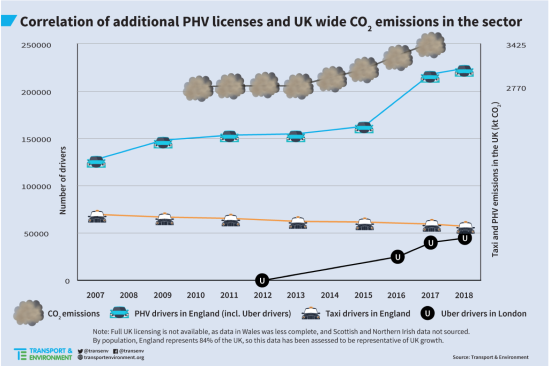 This has made Uber one of the biggest taxi services in Europe, with 3.6 million users in London in 2019 and with 2.7 million users in France in 2017. According to company documents issued for its stock market launch, Uber is looking to increase massively its operations worldwide and is eyeing Europe in particular, identifying Germany, Spain and Italy as priority markets for expansion.

The number of taxi licenses has been capped through licenses; however Uber has seen rapid growth. Since Uber’s arrival in London, its biggest European market, taxi and PHV trips have increased by roughly 25% in the capital. This data strongly correlates with a 23% increase in overall CO2 emissions for the taxi and PHV sector in the UK in the same period.

The analysis estimates that in London and Paris alone, the emissions of Uber taxi services could be as high as 515 kilotonnes of CO2—more than one half a megatonne. This is equivalent to adding the CO2 emissions of an extra 250,000 privately owned cars to the road.

These kilometers have predominantly been driven by gasoline and diesel cars, exacerbating the air pollution crisis in European cities. French government data from 2017 show that 90% of the registered private hire vehicles, which includes Uber, were diesel cars.

The high share of diesels in the PHV fleet can be also found in the traditional taxi market. It’s thought that other European cities where Uber operates have similar levels of diesels in their fleet.

Uber’s CEO tells us they ‘do the right thing, period.’ But the reality is that Uber is part of the traffic and pollution problem, adding car trips in our cities and adding to the climate and pollution crisis. If it wants to become part of the solution Uber needs to stop using petrol and diesel cars and rapidly shift to 100% electric rides. That’s the right thing to do, full stop.

The findings confirm that cities in Europe face the same challenges as American ones, such as New York, Boston, Chicago, and San Francisco, where Uber and Lyft have been shown to exacerbate pollution and congestion.

A broad coalition of green NGOs in the US, Germany, France, the UK, The Netherlands and Belgium has just launched the #TrueCostOfUber campaign. This collective action aims to tell concerned citizens and city authorities that Uber needs to clean up its act in order to operate in cities across Europe and the US. The company therefore needs to help their drivers switch to zero-emission cars as it is already doing in London due to the ultra-low emission zone in the capital.

The coalition includes organizations such as the Sierra Club, Nabu, Respire, MilieuDefensie, Bond Beter Leefmilieu, Les Chercheurs d’Air and Transport & Environment. These organizations will take the campaign to the cities of Paris, Brussels, Berlin, Amsterdam, Antwerp, Manchester, amongst others, urging local authorities to clean up Uber.

Going electric won't do anything about the congestion problem.

If there's a fix for this, it's going to include a lot of automation.  Whole lines of traffic which accelerate like trains are one of the few remaining ways to move more vehicles through a fixed amount of space.  There also needs to be a way to assess "parking" fees on vehicles which are not in service but still taking up room in traffic lanes.  The system needs to bill them more to mill around than to pull off.

What this shows is that privately owned cars on a daily round-trip commute are actually quite efficient. While Uber and other ride hail services circle around looking for customers, the privately owned commuter vehicle sits parked and emits no green house gases. As a parked car, it occupies less than 100 square feet (less than 10 square meters), less room than a circling car in traffic uses. It's another example of unintended consequences. The claim for Uber was that it would reduce congestion and emissions; however, the opposite has been the case.

@Fred Schumacher
I think it shows that Uber in Europe has taken business away from public transport. Also having a diesel car drive 20,000+ miles per year in the centre of any city is not going to be doing much good for anyone.