“Insights into Future Mobility,” a multidisciplinary report released by the MIT Energy Initiative (MITEI), explores how individual travel decisions will be shaped by complex interactions between technologies, markets, business models, government policies, and consumer preferences—and the potential consequences as personal mobility undergoes tremendous changes in the years ahead.

The report is the culmination of MITEI’s three-year Mobility of the Future study, which is part of MIT’s Plan for Action on Climate Change. The report highlights the importance of near-term action to ensure the long-term sustainability of personal mobility.

The researchers ultimately find that continued technological innovation is necessary and must be accompanied by cross-sector policies and changes to consumer behavior in order to meet Paris Agreement targets for greenhouse gas emissions reductions.

Understanding the future of personal mobility requires an integrated analysis of technology, infrastructure, consumer choice, and government policy. The study team has examined how these different dimensions will develop and interact, and the report offers possible pathways toward achieving a more sustainable personal transportation system.

The study team of MIT faculty, researchers, and students focused on five main areas of inquiry:

To consider the potential impacts of global decarbonization on trends in the light-duty vehicle (LDV) fleet from 2020 to 2050, the team modeled three policy scenarios: a reference scenario that assumes no additional policy action to mitigate climate change, and two scenarios that assume different levels of international effort to reduce global greenhouse gas emissions.

In all scenarios, they used an enhanced version of the MIT Economic Projection and Policy Analysis (EPPA) model to explore changes in LDV fleet composition, fuel consumption, electricity production, CO2 emissions, and macroeconomic impacts (including the cost of avoided CO2 emissions). EPPA is a multi-sector multi-region computable general equilibrium (CGE) model that is used for projecting the macroeconomic, energy, and emission implications of different climate policy scenarios.

The EPPA model provides economy-wide coverage of the world, disaggregated into 18 regions, and solves at five-year increments. The model represents households at an aggregate level and generates estimates of LDV fleet composition. 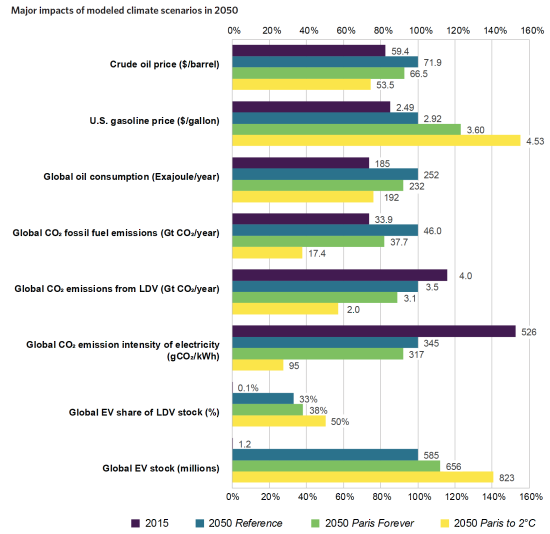 From Insights into Future Mobility

The researchers found that there is considerable opportunity for reducing emissions from personal mobility by improving powertrain efficiency and deploying alternative fuel vehicles in the coming decades. These changes must be accompanied by decarbonization of the production of the fuels and electricity that power these vehicles in order to reach global emissions mitigation targets and achieve cleaner air and other environmental and human health benefits.

Our analysis shows that reducing the carbon intensity of the light-duty vehicle fleet contributes to climate change mitigation goals, as part of the larger solution. If we are to reach international goals for limiting temperature rise and other climate change-related impacts, we will need comprehensive climate policies that promote the adoption of alternative fuel vehicles in the transportation sector and simultaneously decarbonize the electricity sector.

—Sergey Paltsev, deputy director of the MIT Joint Program on the Science and Policy of Global Change and senior research scientist at MITEI

Several factors influence an individual’s decision to adopt an alternative fuel vehicle, such as a battery electric vehicle. The researchers found that the most important, interrelated factors that impact alternative vehicle adoption include cost, driving range, and charging convenience.

They concluded that as production volumes increase, battery costs and the purchase price of electric vehicles will decrease, which will in turn drive sales. Improved batteries would extend the vehicle range, reinforcing the attractiveness of alternative fuel vehicles to consumers. Greater deployment of electric vehicles creates a larger market for publicly available charging infrastructure, which is critical for supporting charging convenience.

We found that substantial uptake of battery electric vehicles is likely and that the extent and speed of this transition to electrification is sensitive to evolving battery costs, availability of charging infrastructure, and policy support.

—William H. Green, a professor of chemical engineering at MIT and the study chair

This large-scale deployment of battery electric vehicles is expected to help them reach total cost-of-ownership parity with internal combustion engine vehicles in approximately 10 years in the .S. It should also lead to new business opportunities, including solutions for developing cost-effective methods of recycling batteries on an industrial scale.

The researchers also examined the role of consumer attitudes toward car ownership and use in both established and emerging economies. In the US, the researchers analyzed trends in population and socioeconomic factors to estimate future demand for vehicles and vehicle travel.

While many have argued that lower car ownership and use among millennials may lead to a reduced personal vehicle fleet in coming decades, the study team found that generational differences could be completely explained by differences in socioeconomics—meaning that there is no significant difference in preferences for vehicle ownership or use between millennials and previous generations.

Therefore, the stock of light-duty vehicles and number of vehicle-miles traveled will likely increase by approximately 30 percent by 2050 in the US. In addition, the analysis indicates that “car pride”—the attribution of social status and personal image to owning and using a car—has an effect on car ownership as strong as that of income. An analysis of car pride across countries revealed that car pride is higher in emerging vehicle markets; among established markets, car pride is highest in the US.

The adoption of new technologies and business models for personal mobility at scale will require major shifts in consumer perceptions and behaviors, notes Joanna Moody, research program manager of MITEI’s Mobility Systems Center and a coordinating author of the report.

Symbolic and emotional attachments to car ownership and use, particularly among individuals in emerging economies, could pose a significant barrier to the widespread adoption of more sustainable alternatives to privately owned vehicles powered by petroleum-based fuels. We will need proactive efforts through public policy to establish new social norms to break down these barriers.

The researchers also looked at China, the largest market for new vehicle sales, to analyze how cities form transportation policies and to estimate how those local-level policies might impact the future size of China’s vehicle stock.

To date, six major Chinese cities and one province have implemented car ownership restriction policies in response to severe congestion and air pollution.

The researchers found that if the six megacities continue with these restrictions, the country’s light-duty vehicle fleet could be 4 percent (12 million vehicles) smaller by 2030 than it would be without these restrictions.

If the policies are adopted in more of China’s cities facing congestion and air pollution challenges, the fleet could be up to 10 percent (32 million vehicles) smaller in 2030 than it would be without those restrictions.

Finally, the team explored how the introduction of low-cost, door-to-door autonomous vehicle (AV) mobility services will interact with existing modes of transportation in dense cities with incumbent public transit systems.

They found that introducing this low-cost mobility service without restrictions can lead to increased congestion, travel times, and vehicle miles traveled—as well as reduced public transit ridership. However, these negative impacts can be mitigated if low-cost mobility services are introduced alongside policies such as “first/last mile” policies (using AVs to transport riders to and from public transit stations) or policies that reduce private vehicle ownership. The findings apply even to cities with vastly different levels of public transit service.

Building on the research started under the Mobility of the Future study, MITEI has now launched a new Low-Carbon Energy Center, the Mobility Systems Center. Approaching mobility from a sociotechnical perspective, the center identifies key challenges, investigates current and potential future trends, and analyzes the societal and environmental impacts of emerging solutions for global passenger and freight mobility.

The Mobility of the Future study received support from an external consortium of international companies with expertise in various aspects of the transportation sector, including energy, vehicle manufacturing, and infrastructure. The report, its findings, and analyses are solely the work of the MIT researchers.

"car pride"
You don't sell more than one million pickups each year by accident.

Indeed.  Use of inefficient pickup trucks as status symbols is one of the great social dysfunctions of the USA.