Heliogen, a company that is transforming sunlight to create and replace fuels, recently announced its launch and also said that it has—for the first time commercially—concentrated solar energy to exceed temperatures greater than 1,000 degrees Celsius. 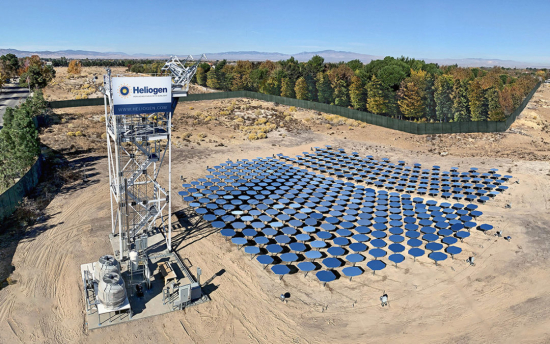 At that temperature, Heliogen can replace the use of fossil fuels in critical industrial processes, including the production of cement, steel, and petrochemicals, dramatically reducing greenhouse gas emissions from these activities. This singular scientific achievement was accomplished at Heliogen’s commercial facility in Lancaster, California.

Heliogen’s mission is to create the world’s first technology that can commercially replace fossil fuels with carbon-free, ultra-high temperature heat from the sun and to transform sunlight into fuels at scale. Its heat technology represents a key technical breakthrough for concentrated solar thermal.

Previous commercial concentrating solar thermal systems have been designed to reach temperatures of up to only 565 degrees Celsius—useful for power generation, but insufficient for many industrial processes. Many of these processes require much higher temperatures, which have traditionally been reached through the burning of fossil fuels.

The potential impact of Heliogen’s patented technology is massive. With temperatures from its concentrating solar thermal technology exceeding 1,000 degrees Celsius, Heliogen will be able to replace the fuel that generates greenhouse gas emissions from industrial processes with solar energy for the first time. For instance, cement production—one of the industrial processes well suited to Heliogen’s technology—alone accounts for more than 7 percent of global CO2 emissions.

Heliogen’s technology roadmap calls for temperatures up to 1,500 degrees Celsius. At that temperature, Heliogen can perform CO2-splitting and water-splitting to make 100% fossil-free fuels such as hydrogen or syngas.

Heliogen is able to achieve these breakthrough temperatures as a result of its technology that uniquely uses advanced computer vision software to hyper-accurately align a large array of mirrors to reflect sunlight to a single target.

The firm’s founder and chief executive officer is Bill Gross, a lifelong entrepreneur and founder of Idealab. The Heliogen team includes scientists and engineers from Caltech, MIT, and other leading institutions and is based in Pasadena, California.

Heliogen is working with Parsons Corporation, a leader in the defense, intelligence, and critical infrastructure markets. Parsons, Heliogen’s strategic partner, has more than a decade of experience with the development and implementation of innovative solar thermal projects.

We’ve made great strides in deploying clean energy in our electricity system. But electricity accounts for less than a quarter of global energy demand. Heliogen represents a technological leap forward in addressing the other 75 percent of energy demand: the use of fossil fuels for industrial processes and transportation. With low-cost, ultra-high temperature process heat, we have an opportunity to make meaningful contributions to solving the climate crisis.

How do you make large amounts of cement at the top of a solar tower ?
OK, so you can align about 300 mirrors, impressive, but it looks like a lot of fuss to replace a natural gas (or whatever) furnace.
+ it can't run continuously, i.e. at night.
You certainly won't get 1000 degrees C heat from an overnight storage system.

Be great in a James Bond movie, though.
"No, Mr Bond, I expect you to fry".

Lancaster CA is in the Antelope Valley, a high desert.  It is the bedroom community for Edwards AFB.

These big CSP ideas don't work anywhere other than such deserts; they need extremely clear skies, and I wouldn't be surprised if the optical techniques used include real-time mirror warping to compensate for atmospheric "shimmer".  They're also going to require the ground to be cleared of most plants and wildlife... like desert tortoises.  I doubt we're going to see them take off in anything like the way they would have to in order to replace fossil fuels for process heat.

Then there's cement.  Production of Portland cement begins with limestone (CaCO3) which is broken down to CaO + CO2 before the calcium can react with silica.  This CO2 is produced even if no fuel is burned for process heat.  Unless there is carbon capture on the kiln, solar-derived cement will still be a powerful CO2 emitter.

Use an SOEC to make oxygen and hydrogen, sell the oxygen then combine the hydrogen with some of the CO2 they send to the Bakersfield oil fields to make fuels.

Use teh solar power to reduce zinc ore and the oxide to zinc and you have a closed zinc fuel cell energy cycle, zero or low carbon:


The European SOLZINC project has built and tested a Solar Thermal Reactor in Israel which can reduce Zinc Oxide to Zinc metal by solar power. An array of mirrors focuses sunlight onto a collector which then directs the concentrated light into the reactor chamber containing Zinc Oxide and beech charcoal. The temperature reaches over 1600 deg C. The charcoal reduces the oxide to Zinc metal. If the charcoal is produced from sustainable forests, the net CO2 emissions would be zero.


If the temperature is raised somewhat more, Zinc Oxide will thermally dissociate into Zinc metal and Oxygen under the action of heat alone, without the need for carbon. This higher temperature can be achieved in the SOLZINC reactor.