JRC: Traffic measures could effectively reduce NO2 concentrations by 40% in European cities

Concentrations of the harmful NO2 pollutant across 30 major European cities could be reduced by up to 40% with the correct traffic policy measures, according to EU Joint Research Center (JRC) scientists.

According to the World Health Organization (WHO), air pollution is the single largest environmental health risk in Europe. Nitrogen dioxide (NO2) alone was responsible for 68,000 premature deaths within the EU in 2016 and many European cities still regularly exceed current EU limits for NO2.

The Urban NO2 Atlas developed by JRC scientists provides city factsheets to help designing effective air quality measures to reduce NO2 concentration within European cities. The analysis uses the SHERPA-City web tool developed by the JRC. This tool is freely available and allows the user to perform a fast screening of possible NO2 abatement measures addressing traffic in city of choice.

The Atlas identifies the main sources of NO2 pollution for each city examined, helping policymakers to design actions that target them.

When road transport is one of the main source of NO2 pollution, targeted actions could include restricting the access of certain types of vehicles to inner city areas, or applying environmental charges to the largest polluters.

Road transport: the main source of urban NOx pollution. For the 30 European cities analysed in the report, the average contribution of transport to overall nitrogen oxides (NOx) emissions was 47%.

Within the whole EU, road transport is the largest contributor to NOx (NO and NO2) pollution, ahead of the energy, commercial, institutional and household sectors.

As shown by the report, the shares of road transport in total local NOx emissions differ considerably across Europe.

In Athens and Milan more than 70% of emissions comes from transport, while in Lisbon, where shipping emissions are high, road transport is only responsible for 20% ofNOx pollution. 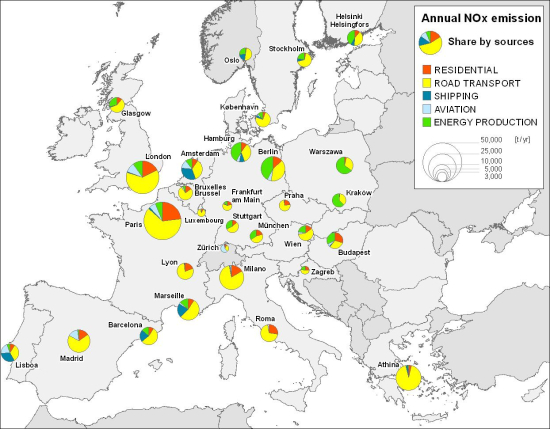 Share of different sectors in NOx emissions for the 30 European cities analyzed. ©EU 2019

A closer look on the road transport sector shows that NO2 in cities mainly originates from the emissions of diesel vehicles.

The map below shows that, except in Greece, diesel-fueled vehicles are responsible for the bulk of road transport NOx emissions across all EU countries. 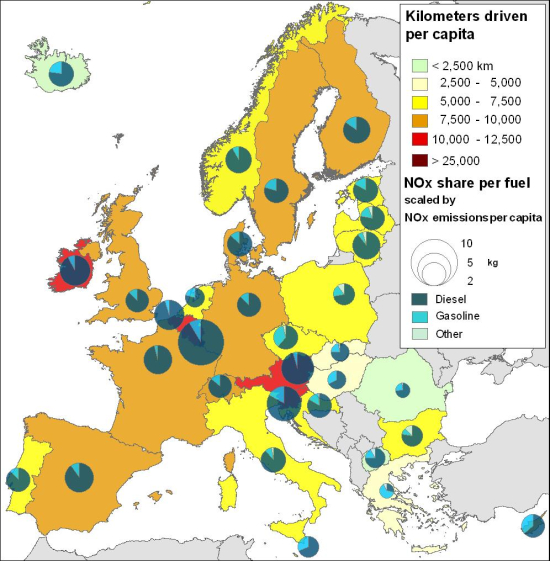 Country share of the NOx emissions per type of fuel (diesel, gasoline and other), correlated with kilometers driven per capita. ©EU 2019

Traffic policy measures could reduce emissions. JRC scientists estimate that, through reducing the flow of NOx-emitting traffic, cities could lower NO2 emissions by an average of 40%.

Around 15% reduction could come from passenger diesel cars, 13% from trucks and 6% from vans.

The local effectiveness of traffic measures largely depends on the share of road transport in NOx emissions.

NOx-emitting traffic flows can be reduced by limiting the access of highly pollutant vehicles—primarily older diesel cars—to inner areas of cities. The same result can also be achieved by encouraging electric vehicles and fostering the use of public transport, bikes and walking.

The methodology relies on a number of assumptions and the results depend strongly on the quality of the default input data. It is therefore important to stress that the underlying traffic flows, emission factors, fleet composition, road network topology, NO2 pollution from other sources and meteorological data are based on EU-wide datasets that may not always represent perfectly a particular local situation.

This is why the SHERPA-City web tool allows the default data to be substituted by local data. This atlas must be considered as a first step in exploring options to abate NO2 air pollution through transport measures. The final decisions should be based, wherever possible, on full-scale modelling studies incorporating local knowledge.

Run EVs then we can eliminate more of it.