Audi is introducing a standard technical update for its first all-electric product, the e-tron. This combines optimized drive system hardware with software adjustments to improve efficiency. As a result, all versions of the e-tron SUV will come off the assembly line with an extra 25 kilometers (15.5 mi) or so of range. The new models are available now to customers in Europe. 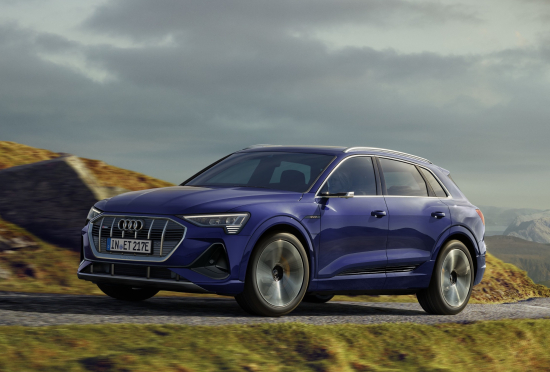 The new versions of the Audi e-tron 55 quattro will be able to drive for up to 436 kilometers (270.9 mi) on a full battery charge (WLTP cycle)—an additional 25 kilometers (15.5 mi) over its previous capability. Using a new type of wheel brake, the developers have achieved further reductions in residual brake torque. This refers to losses that occur as a result of the proximity of the brake calipers to the brake discs.

The drive system has also become more efficient. In normal driving, the motor on the rear axle provides propulsion as standard. Now, due to a number of optimizations, the front electric motor is almost entirely disengaged and disconnected from the electricity supply. Only when the driver requests more power do both motors spring into action.

Running without power or drag losses, the major advantage of the asynchronous motor concept is even more effective as a result.

In addition, the usable range of the high-voltage battery has increased. The battery in the Audi e-tron 55 quattro has a total capacity of 95 kWh and now gives customers access to a net power figure of 86.5 kWh.

All newly produced models will benefit from the technical upgrade. There is no change to prices for the Audi e-tron 55 quattro, which start at €80,900 (US$89,000).

The engineers have also made improvements to cooling. The highly flexible thermal management system, which comprises four separate circuits, has been revised and now regulates the temperature of the high-voltage components even more efficiently. Volume flows in the coolant circuit have been reduced, which means that the pump uses less power.

The sophisticated cooling system continues to guarantee rapid DC charging, a long battery life cycle and reproducible performance even under heavy loads. The standard heat pump harnesses waste heat from the high-voltage battery to keep the interior warm. Depending on the outside temperature, that can boost the Audi e-tron’s range by up to ten percent in customer operation.

During deceleration actions of up to 0.3 g—which applies to more than 90% of such actions in everyday driving,mdthe high-voltage battery is charged by the electric motors, which act as generators. The recuperation system provides for variable regulation of energy recuperation between both electric motors, both in coasting mode and during braking.

The degree of coasting recuperation can be set to any of three stages by means of paddles on the steering wheel, and there are now greater distinctions between the three, which allows the driver the option of a more pronounced “one-pedal feeling.” When braking from 100 km/h (62.1 mph), the Audi e-tron can recuperate up to 300 N·m (221.3 lb-ft) and 220 kW. That corresponds to more than 70% of its operating energy input.

Sporty S line. The new equipment version is available now and features 20-inch wheels and sport air suspension. The more distinctively contoured bumper is flanked by bigger and more expressive air curtains, which improve air flow. They extend below the headlights, thereby creating a dynamic appearance even from a distance.

An S line emblem adorns the radiator grille, while the illuminated aluminum door sill trims feature an #S logo. The spoiler fitted as standard and a striking diffuser at the rear contribute to the aerodynamics of the e-tron Sportback. In contrast to the basic model, the attachments on the S line exterior are painted in the exterior body color, including the wheel arch trims, door sills, bumpers and exterior mirrors. The optional black styling package also accentuates the area of the Singleframe, the side windows and the bumper. The exterior mirror housings are also available in black as an option.

It would be nice to see how much of this can filter down into the rest of the VW group's electrification over the next 2-4 years.
Nice to see the range increased; I hope this is by really increasing the range, rather than just getting better at the WLTP test (would VW do a thing like that ?)
However, it is still way too expensive, e30-40 K would be more like it, VW Golf - Passat pricing please - I am sure most people could get by with a 50-60 kWh battery and 2 wheel drive.

Bit by bit the ways to implement incremental improvements should apply to all that wish to stay competitive.
The two motor system is an efficient way to offer high power on demand but in this version - If the front is disconnected does that mean lost opportunity to the regenerative braking?
Presumably the new braking 'residual torque' refers to disc pad drag reduction which would be interesting to detail.