The BMW Group and Great Wall Motor have launched a new joint venture—Spotlight Automotive Limited—and are building a joint plant in China, where the BMW Group will produce future fully-electric models of its MINI brand.

The plant will have a standard capacity of up to 160,000 vehicles per year, which will require around 3,000 employees after the ramp-up phase. Both partners will together invest around €650 million (more than five billion CNY). The construction phase is planned for 2020 to 2022.

In summer 2018, the 50:50 joint venture agreement was signed in Berlin in the presence of Chinese Premier Li Keqiang and German Chancellor Angela Merkel.

As well as production, the innovative joint venture model also includes joint development of battery-electric vehicles in the world’s largest market for electromobility.

The joint venture envisages production of future electric MINI vehicles, as well as several models and brands for Great Wall Motor. Following the launch of the brand-new first-generation fully-electric MINI, which will be built at Oxford and come to market in the first quarter of 2020, this is another important step towards the MINI brand’s electrified future.

MINI Plant Oxford, which recently built the 10 millionth car since the brand’s launch in 1959, will remain the heart and home of MINI manufacturing, while the Spotlight Automotive joint venture will provide additional capacity and flexibility.

Zhangjiagang was chosen as the location of the Spotlight plant because of its solid supplier network, skilled workforce and good infrastructure. Jiangsu is also one of the leading provinces for finance, education and technology.

The BMW Group is firmly committed to continuing its successful cooperation with established sales structures and channels in China. The joint venture will not be creating an additional sales organization in China for future electric vehicles. Every joint venture partner will use their own sales channel for their specific brands.

The BMW Group is already a leading supplier of electrified vehicles. By the end of 2021, the company aims to have more than one million fully-electric vehicles and plug-in hybrids on the roads worldwide. 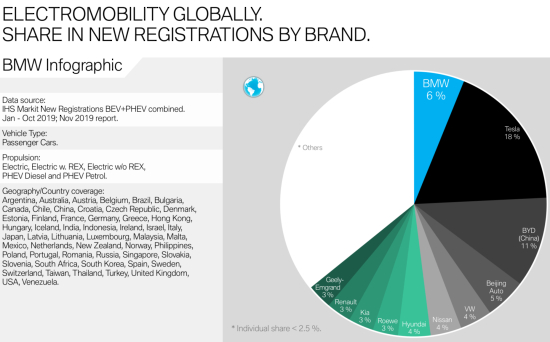 At that point, the BMW Group will offer five fully-electric production vehicles. Alongside the BMW i3, which saw demand increase by approximately 20% so far this year, production of the fully-electric MINI will also begin at the Oxford plant (UK) this month.

More than 78,000 customers have so far expressed an interest in the MINI ELECTRIC. In 2020, production of the fully-electric BMW iX3 will begin at the Shenyang plant (China), followed in 2021 by the BMW iNEXT, which will be built at the Dingolfing plant (Germany). The BMW i4 is also due to go into series production at the Munich plant in 2021.

By 2023, the company will already offer 25 electrified models—more than half of which will be fully electric. Flexible vehicle architectures, which allow a model to be driven fully electrically, as a plug-in hybrid or with a combustion engine, form the basis for this, as well as a highly flexible production system.