Researchers from the Center for Functional Nanomaterials at Brookhaven National Laboratory and users from ExxonMobil have developed a new approach to identifying atoms that are neither carbon nor hydrogen within a specific type of molecule in crude oil.

The team used non-contact atomic force microscopy (nc–AFM), a process in which a scientist uses a very sharp probe to scan a surface without touching it. The tool then creates an image based on the interactions between probe and surface.

Scientists used these measurements to determine the chemical structure of molecules that can be found in complex mixtures of crude oil. 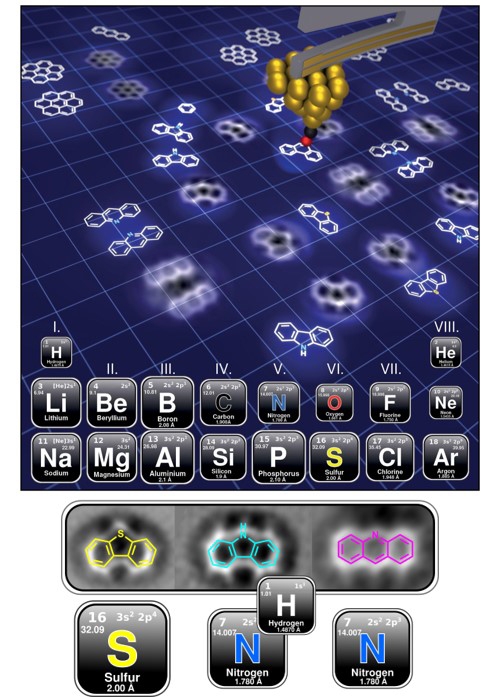 Atoms such as nitrogen and sulfur are commonly found in these molecules and are important because of how they react with other chemicals; NOx and SOx are two major pollutants that result from burning fossil fuels. Unfortunately, traditional methods of figuring out a molecule’s chemical composition don’t produce clear results for complex molecule mixtures. Crude oil is one of the most complex molecule mixtures on the planet. Being able to identify hydrocarbon molecules that have nitrogen and sulfur can improve methods to refine cleaner fuels from crude oil.

Heteroatoms—atoms that are neither carbon nor hydrogen—are essential to the functional groups in organic hydrocarbons molecules that provide chemical reactivity and other properties. It is challenging to identify quickly heteroatoms in small molecules and resolve chemical structures in complex unknown mixtures.

This study aimed to understand the effect of elemental types on the contrast of atomic force microscopy (AFM) images using a few selected model heterocycles (a cyclic compound that has atoms of at least two different elements as members of its ring), including dibenzothiophene, acridine, and carbazole.

The researchers identified several features that can be used to find sulfur and nitrogen heteroatoms and discriminate them from carbon atoms using only non-contact AFM.

The mechanism of the atom and bond contrast was studied with image simulations and was found to be mostly correlated to van der Waals radii, but other factors such as bonding geometry, electron density, and substrate interaction, are considered.

This work will allow for rapid AFM identification of these heteroatoms commonly found in petroleum. While nc-AFM and molecule imaging is not that new, it still is a very demanding experiment and requires not only a dedicated microscope, but also experimental expertise. The Center for Functional Nanomaterials, a Department of Energy Office of Science user facility at Brookhaven National Lab, is offering this nc-AFM service to users from around the world.

This research used resources of the Center for Functional Nanomaterials, which is a US DOE Office of Science Facility, at Brookhaven National Laboratory under Contract No. DE-SC0012704.