According to the Federal Highway Administration, the average fuel economy for all light vehicles on the road today is 22.3 miles per gallon (mpg) and the average annual miles driven is 11,484 miles. The Federal tax on gasoline is 18.4 cents per gallon, and each state has a gasoline tax, ranging from 8.95 cents in Alaska to 58.7 cents in Pennsylvania.

Since taxes are charged on a per-gallon basis, someone with a more efficient vehicle will pay less in taxes over the course of a year. Based on average mpg and miles driven, a person owning a gasoline vehicle pays between $141 and $398 in fuel taxes each year, depending upon the state in which the fuel is purchased. 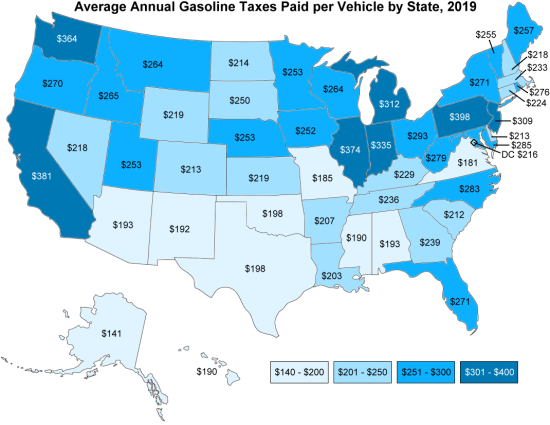 Based on a vehicle with an average fuel economy of 22.3 mpg driven 11,484 miles in 2019. Taxes include federal and state gasoline tax, along with other per-gallon fees, such as leaking underground storage tank fees.
Source: Calculated by Oak Ridge National Laboratory using average annual miles and average fuel economy of the light-duty vehicle population from the U.S. Department of Transportation, Federal Highway Administration, Highway Statistics 2017, Table VM-1; and tax data by state from the U.S. Energy Information Administration website, August 2019.

For comparison, the UK equivalent is about USD 648 fuel tax per vehicle per year.

That's based on an average mileage of 7,134 miles per year and a fleet fuel economy of 38 mpg (imperial gallons). Fuel is taxed in the UK at a rate of £0.58 per litre.