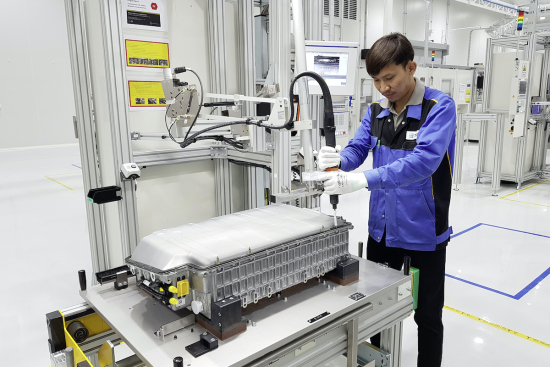 Together with the local partners Thonburi Automotive Assembly Plant (TAAP) and Thonburi Energy Storage Systems (TESM), Mercedes-Benz AG has invested a total of more than €100 million in the battery production and a plant expansion of the existing vehicle production plant.

In doing so, the partners are responding to the high demand for electric mobility and, in particular, for plug-in hybrid vehicles in Thailand.

The production facilities are highly standardized and flexible. As a result, they can be adapted to local market conditions in a short time. With the joint investment in the new factory building as well as the factory extension, Mercedes-Benz AG and the local partner TAAP are once again strengthening their cooperation.

The plug-in hybrid models of Mercedes-Benz Sedans, especially the C- and E-Class, are in particular demand in Thailand.

The battery systems manufactured in the new battery factory, are used among others for the current Mercedes-Benz C-Class, E-Class, S-Class as well as for the Mercedes-Benz GLC and GLC Coupé. The high variety of product variants of the local market require very flexible and efficient production and facility concepts.

Central assembly stations were set up in the same way as in the battery factory in Kamenz and were further developed for site-specific requirements. In this way, all battery types can be manufactured in the new line for all current and future plug-in hybrids.

The battery factory in Bangkok meets Mercedes-Benz standards in terms of ergonomics, industrial safety and digitalization. For example, a new benchmark has been implemented for process assurance: The product quality is generated by a quality assurance system that monitors all production processes online along the value creation. In addition the plant has its own assessment and testing center.

The decision for a local battery production in Thailand supports Mercedes-Benz’s overall sustainability goals under the heading “Ambition2039” as well. The aim is a carbon neutral new car fleet until 2039. By 2030, at least every second vehicle sold should have an electric drive—this includes full-electric vehicles and Plug-In hybrids.

On the way to sustainable mobility, production plays a central role: All European Mercedes-Benz plants are to produce completely carbon neutral from 2022. The battery factory in Bangkok will meet this requirement by using large solar systems on the roofs of the production buildings.