ENGIE, a global energy and services company, has selected Plug Power Inc. to provide a custom refueling system for the world’s largest hydrogen-powered mine haul truck (300 metric ton load capacity), which is set to begin operation next year. (Earlier post.)

The project has emerged from a global partnership agreement between the two companies that was announced in September of this year and is the latest example of Plug Power’s continuing innovation in clean hydrogen solutions.

ENGIE is working with Anglo American, a global mining company, to develop a renewable hydrogen production and refueling solution to support a new hydrogen-powered mine haul vehicle that will be tested at one of its South African platinum mines.

Eight Ballard FCveloCity-HD 100 kW fuel cell modules will power a retrofitted Ultra heavy-duty mining truck in the demonstration project. Operational performance of the converted trucks is expected to be the same or better than the original diesel trucks, with the additional benefits of cleaner air, less noise and lower maintenance costs. 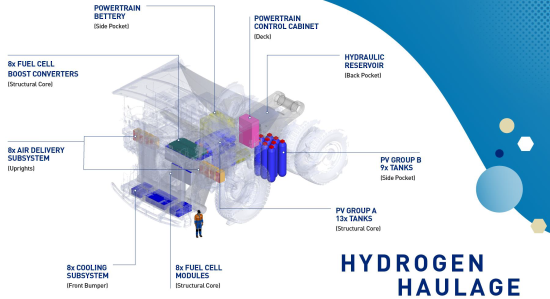 To support the refueling project, Plug Power has been tasked with building a full compression, storage, and dispensing system to service the new hydrogen-powered vehicle.

Plug Power’s system will be the first of its kind, and the largest refueling system built by the company to-date, with an expected output of 1,000 kg per day.

First fueling and motion of the hydrogen powered truck is expected in 2020, followed by a testing and validation program at Anglo American’s Mogalakwena Platinum Group Metals mine in South Africa, after which additional trucks are expected to be rolled out at other Anglo American operations.

This looks like a good application for H2 FC vehicles.
1. Infrastructure, no problem: Remote mines are required to ship in large quantities of diesel fuel, so once you build the generation structure you own the energy infrastructure.
2. Mining trucks typically use AC induction drive systems (no change needed except additional batteries (the ENGIE truck will have 900 kW FC - so needs to up power to 2400 kW). Reference: check Caterpillar 795F AC.
3. For Anglo American platinum mines looks like good advertising.