The roadmap to achieve the 30% target is based on three distinct pathways that have the potential to deliver a significant reduction in carbon emissions, including: 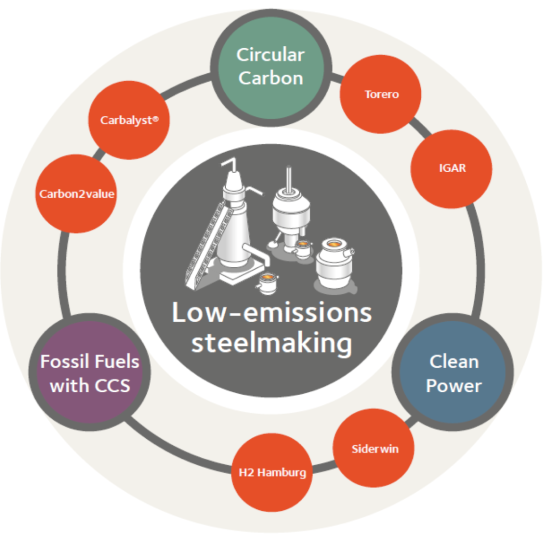 Key to the success of the roadmap, and ArcelorMittal Europe’s ambition to be carbon neutral by 2050, will be supportive policy to ensure a global level playing field. Thus, ArcelorMittal supports the European Commission’s Green Deal, and believes the right market mechanisms are a critical part of enabling the deployment of low-emissions steelmaking.

This includes a carbon border adjustment complementary to the existing ETS and the Just Transition Fund, to invest in research, innovation and green technology.

Initiatives and technologies underway or to be implemented at ArcelorMittal Europe – Flat Products’ different sites include:

We are committed to the decarbonization of the steel industry, in line with the objectives of the Paris Agreement and the European Union’s commitment to net-zero by 2050 as announced in the Green Deal this week. Our roadmap and the emissions reduction target of 30% by 2030 for Europe is a big step in the right direction. It’s not a one-size-fits-all model, as different parts of our business are at varying starting points. For some sites, certain technologies will work while others will be suited to another route. We’ve spent the last few years testing a range of technologies and now is the time to scale up and put them into action, with the support of the EU and member states, to ensure we are able to fully decarbonize.

They're going in the right direction, but when full decarbonization requires major or complete replacement of the current technology this is just a stopgap.  If we're going to reduce iron ore, we really need hydrogen or electrolytic processes.

"... convert waste wood into bio-coal..." Bio-coal? I think that used to be called charcoal. Historically, a lot of forests were cut down to create charcoal for making iron before being replaced with cheaper coke from coal.