UK-based engineering specialist Sheffield Forgemasters is leading a consortium of partners in a £10.5-million (US$14 million) project to explore the industrialization of Electron Beam Welding (EBW) in civil nuclear assemblies. The project has the potential to integrate welding into the manufacturing process, offering material improvements and vast reductions in manufacturing time and cost. 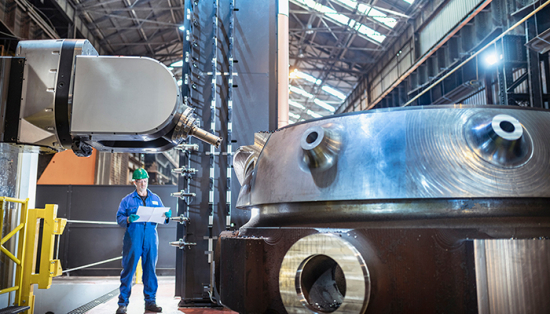 Traditionally, the welding of “thick section” components such as pressure vessels within the nuclear industry has been performed using arc-welding techniques, which require multiple weld passes with inter stage non-destructive examination (NDE) and pre-heating of the component to reduce the risk of hydrogen cracking.

For a nuclear plant, the joining of components is currently used through the use of the Tungsten Inert Gas (TIG) process. TIG-welding of “thick-section” pressure vessels such as the Reactor Pressure vessel is an expensive and time-consuming practice involving extensive pre-work including fixtures, tooling, pre-heating of the components and multiple weld passes.

Another drawback to using the TIG process is that it can only penetrate to a certain depth so thick-section welding is executed by filling the weld groove with several passes. Typically, this involves up to 100 runs of weld for a typical Reactor Pressure Vessel section of 140mm or greater.

Historically, there have been many attempts to deploy Electron Beam Welding (EB) with local vacuum pumping, but most were hampered by the need to work at high vacuum.

More recent development of Electron Beam Welding technology offers the opportunity to weld “thick-section” components in a single pass and negates the need for (NDE), which means there’s a significant saving in time and cost in the fabrication of nuclear pressure vessels. Furthermore, elimination of the preheat step is possible since the EB process is carried out in a vacuum environment.

Sheffield Forgemasters has been awarded £8 million (US$10.7 million) of funding from the UK Government’s Department for Business, Energy and Industrial Strategy (BEIS) to lead strategic partners in the project. This marks the largest single grant given under its £20-million Nuclear Innovation Program.

The company will install an electron beam welder capable of welding 3.0m diameter cylinders under localized vacuum and without traditional welding preparation, offering narrower welds than traditional methods plus the ability to weld as part of the manufacturing process, prior to quality heat treatment.

This is a highly advanced manufacturing process which has not yet been brought to industrialization in this sector. Although EBW exists elsewhere, it is used on a smaller scale than the 200mm welds that we will conduct. We aim to demonstrate how EBW can improve material characteristics over traditional welding, which heats up a larger volume of material, but also how this technology can integrate at manufacture to remove component weld properties at a later stage.

Using EBW over traditional welding techniques, circumferential welding of pressure vessels can be reduced from approximately 150 days to 10 days. Through the science that we have already refined, we will be able to produce safer, stronger components for the next generation of nuclear power, with lower costs and vastly reduced production times.

EBW. An electron beam welding machine consists of an electron gun (a device for producing a focused beam of high-speed electrons, velocities of between 0.3 and 0.7 times the speed of light) mounted on or in an evacuated chamber which contains tooling/fixtures used for holding and moving a work piece. 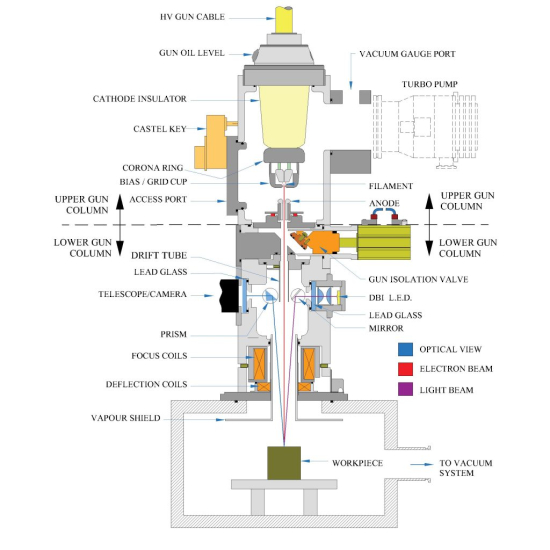 The triode-style electron gun consists of a cathode (also known as a filament); a heated source (emitter) of electrons that is maintained at a high negative potential; a grid cup (also known as a bias cup); a specially shaped electrode that can be negatively biased with respect to the hot cathode emitter; and an anode, a ground potential electrode through which the electron flow passes in the form of a collimated beam.

The hot cathode or filament is made from a high emission material such as tungsten or tantalum. The most common emitter material used in tungsten.

These are then attracted to the anode, which has more positive potential than the electrons. In electron beam welding, the anode has a hole in its center which allows the electrons to pass through the anode as a stream, and on towards the work piece. As the electrons travel to the work piece they pass through a focus coil, or focusing lens (electromagnetic lens) so that the beam can be focused to a fine point in order to achieve sufficient power density to weld metals.

The electron beam will also pass through a deflection coil (electromagnetic) at the bottom of the column which can manipulate the beam at very high speeds. With the addition of some hardware this enables functions such as backscattered imaging, joint finding, real-time seam tracking, auto beam alignment, engraving, beam splitting and Surfi-Sculpt.

Characteristics of electron beam welds include:

CVE’s local Vacuum technology EBFLOW offers the possibility of eliminating the need for a vacuum chamber and has been developed by CVE for the joining of large structures particularly aimed at the renewable energy generation sectors. This technology has been demonstrated to weld thick sections up to 250mm in steels and light alloys.