Women are more likely to telecommute than men

This analysis examined recent changes in the frequency of telecommuting in the United States. Of particular interest were the changes in telecommuting as a function of worker’s gender. Because various occupations differ in the extent to which they allow workers to telecommute, and the occupations differ in the proportion of men and women, finding gender differences in the overall rate of telecommuting would be possible. However, it would not be apparent whether men or women commute more, if, indeed, there were differences.

The data for this analysis came from the American Community Survey—an ongoing survey by the U.S. Census Bureau. The question in this survey that focuses on how people usually get to work has, as one of its response options, “worked at home.” The examined data were from 2010 through 2018, in two-year increments. The data are applicable to workers 16 and older. The results are shown in the table below. 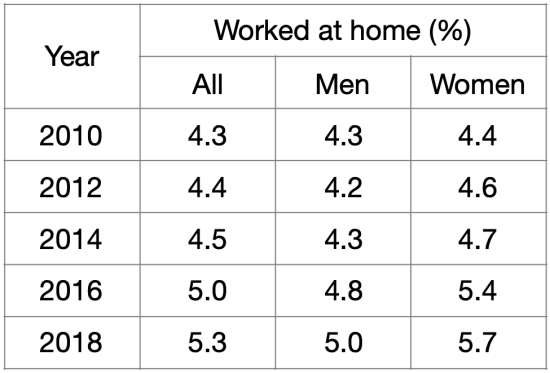 The two main findings are as follows: