A novel oxygenate molecule that can be produced from biomass shows promise for use as a blend for diesel fuel, according to researchers at the National Renewable Energy Laboratory (NREL). Their paper is published in the Proceedings of the National Academy of Sciences.

The NREL scientists, along with colleagues at Yale University, Argonne National Laboratory, and Oak Ridge National Laboratory, are part of the Department of Energy’s Co-Optimization of Fuels & Engines (Co-Optima) initiative. The Co-Optima initiative aims to co-develop advanced engine technologies and fuel components with the goal of reducing petroleum consumption by 30% by 2030 beyond what is already targeted. (Earlier post.)

The research team assessed fuel properties of oxygenates accessible from the catalytic upgrading of short-chain carboxylic acids produced via anaerobic digestion of biomass for their potential to serve as diesel bioblendstocks. 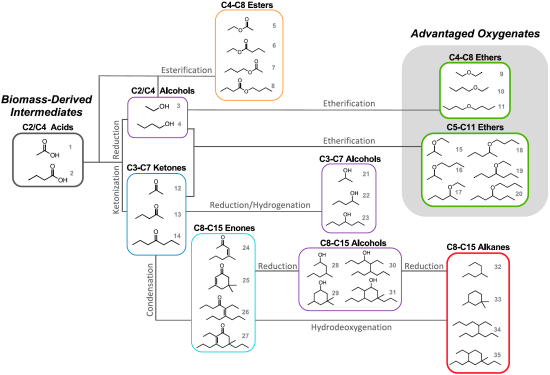 Conversion pathways and products from the catalytic upgrading of acetic and butyric acid. A subset of products is shown here from the more 50 evaluated chemical species across seven chemical families as part of the Co-Optima project. Huq et al.

Storage stability of the pure bioblendstock and 20 vol % blend was confirmed with a common fuel antioxidant, as was compatibility with elastomeric components within existing engine and fueling infrastructure.

Life-cycle analysis determined the potential to reduce greenhouse gas emissions by 50 to 271% relative to petrodiesel, depending on treatment of coproducts.

If you look at biomass, 30% of it is oxygen. If we can figure out clever ways to keep it around and tailor how it’s incorporated in the fuel, you can get a lot more out of biomass and improve the performance of diesel fuel.

Researchers used corn stover-derived molecules as the starting point for an array of potential fuel candidates. From here, they relied on predictive models to determine which molecules would be best to blend with and improve traditional diesel. The molecules were prescreened based on attributes with implications spanning health and safety to performance.

With the goal of developing drop-in biofuels that work with our existing infrastructure, there are a lot of rules and regulations out there that a fuel has to meet. That eliminates a lot of promising molecules because they may be great in certain properties but fail in others. As we’re doing this process, it started to become clear which molecules could be successful fuels.

The intention is to blend the 4-butoxyheptane molecule into diesel fuel at a mixture of 20%–30%. Initial results suggest the potential to improve ignition quality, reduce sooting, and improve fuel economy of the base diesel at these blend levels.

Further research is needed, said first author Nabila Huq, including testing the bioblendstock in an actual engine and producing the fuel in an integrated process directly from biomass.

That first step was just seeing what could rise to the top as far as fuel properties go. Then it was asking, can we make any of these? The molecule that looked most promising was 4-butoxyheptane, and we were able to successfully produce and characterize it.

An economic and life-cycle analysis revealed the oxygenate fuel could be cost-competitive with petroleum diesel and result in significant greenhouse gas reductions if the process also yields a high-value co-product such as adipic acid, which is used in the manufacture of nylon.

Co-Optima funding comes from the US Department of Energy Office of Energy Efficiency and Renewable Energy’s Bioenergy Technologies and Vehicle Technologies offices.