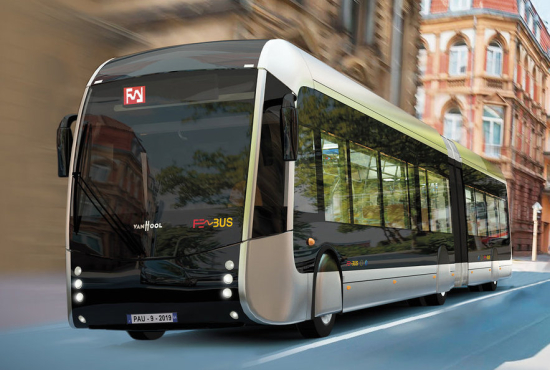 The ExquiCity 18 trams are driven by a Siemens PEM2022 / 210 kW permanent magnet drive motor; a double-motor option with two Siemens PEM2016 / 160 kW motors is an option.

Ballard initially announced a Letter of Intent in September, 2017 and shipped modules to Van Hool in 2018. These first fuel-cell-powered tram-buses were subsequently delivered to Pau in 2019 and are being operated by the SMTU-PPP (Syndicat Mixte de Transports urbains – Pau Portes des Pyrénées) and the STAP (Société de Transport de l’Agglomération Paloise).

The clean energy hybrid tram-buses use fuel cells for primary power and lithium batteries for additional power when needed. Each tram-bus is more than 18 meters (60 feet) long, has capacity for 125 passengers and can operate more than 300 kilometers (185 miles) between hydrogen refuelings.

In addition to environmental benefits, hybrid fuel cell tram-buses offer a number of important advantages, including: high level of operational flexibility and productivity; high level of passenger comfort and safety; lower cost than a traditional tram.

This first ever deployment of fuel cell-powered tram-buses is an exciting event in our ongoing partnership and collaboration with Van Hool, a leading European bus OEM. It also represents another step forward in the growing momentum behind zero-emission fuel cell adoption in Europe’s transportation sector. Ballard’s customer service organization at our Hobro, Denmark facility is available to support the ExquiCity fleet as well as all other Ballard-powered buses operating in Europe.

The tram-bus deployment in Pau is partially funded by Europe’s FCH-JU program. GNVERT, a subsidiary of ENGIE, constructed and operates the hydrogen refueling station for the tram-buses.

In what way is this a tram?
It is no more/no less than an electric bendy bus.