The partners will build a 2MW electrolysis plant with appurtenant hydrogen storage. The plant will use electricity from offshore wind turbines to produce renewable hydrogen for buses, trucks and potentially taxis.

The daily hydrogen production is expected to total around 600kg, enough to power 20-30 buses, while also making testing its use in trucks and taxis possible. The funding awarded to the H2RES project is the largest among the 53 projects which have received funding from the EUDP in this second 2019 call for applications.

Hydrogen is widely used in heavy industry in Europe, but it is mainly produced by converting fossil fuels in a process which emits large amounts of greenhouse gases. Hydrogen may also be produced by means of electrolysis, a process in which electricity is used to split water into hydrogen and oxygen. If the power used for electrolysis originates from renewable energy sources, the hydrogen produced will be renewable. Therefore, the H2RES project, for which Ørsted and partners have just now received funding, will be using power directly from two 3.6MW offshore wind turbines at Ørsted’s Avedøre Power Station. 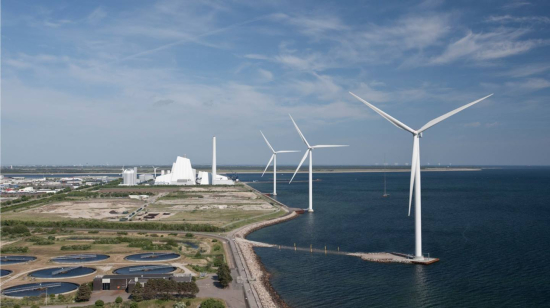 Electrolysis can be run flexibly, thereby helping to ensure flexible use of the fluctuating power production from the offshore wind turbines.

Renewable hydrogen could potentially form a cornerstone of Denmark’s ambition to reduce greenhouse gas emissions by 70% in 2030 and of the transition to a world that runs entirely on green energy. Heavy road transport is one of the sectors which can be made greener by indirect electrification with hydrogen produced from renewable sources. However, renewable hydrogen is currently more expensive than hydrogen produced from gas or coal. Therefore, it’s important for us to be able to demonstrate the technology and gather experience, that will make it possible to scale up the technology and make it more efficient, so that we’ll be able to produce renewable hydrogen at a price which can compete with the price of the fossil-based alternatives.

Assuming 43 kWh/kg energy consumption, this electrolyzer would appear to be operating at about 54% capacity factor.  If the wind farm has a lower capacity factor than that, the electrolyzer is exacerbating intermittency on the grid instead of alleviating it.

Yes, by simple analysis. However, if/when wind and solar are to supply all of the primary energy, the average load will be 3-4 times the current electricity production. In other words, wind and solar will produce more than 'current, uninterruptible' power consumption.

Now, some hierarchy of P2X consumers will establish, based on their CAPEX/OPEX ratio.

Nobody believes this is possible in strict competition with fossil fuels any time soon, so getting Denmark off of fossil fuels and on to electricity + electrofuels will require either subsidies - like wind and solar has enjoyed until last year - or 'artificial markets', such as minimum requirement for drop-in fuel in jet-fuel and/or gasoline and diesel.

I do not believe we can find the room for enough wind and solar to replace current gasoline and diesel with electrofuels, let alone find non-fossil carbon sources for it. Priority should be given to long distance flights.

The 'new' element in this project is to drive the electrolysers directly from wind turbines, rather than the grid. Generally, behind-the-meter power costs about one third than grid power - even less if you're a private consumer and also pay both electricity tax and VAT (on top of all the others).

Transporting as much wind and solar power through the electricity grid as I mentioned above would require very costly expansion of the power grid. Thus the consensus among the big players around the North Sea is that most of the electricity from all those extra wind turbines should not touch the grid before it gets used to produce hydrogen.

It should be possible to electrify nearly all land transport. You could have catenaries over motorways for trucks and wired / battery transport for cities.
You could mix in chemical fuels (chemical or fossil) as required.
Aircraft will be the big problem, but as TP says priority should be given to long distance flights.
You could also use planes differently; for instance, pack more people into them and increase the number of passengers at the expense of range.
Consider the A350-1000. It has a range of 8700 nmi, and can hold 370 passengers in 3 classes. Current state of the art.
Now imagine, you build a double decker version (same wing, same engines) that can hold 5-600 passengers and fly 5500 nmi (and less cargo). That is enough for London to Tokyo or London to LA.

The problem will be filling it; but you could get airlines to share flights (code sharing) as they do now, especially if there was a high tax on aviation fuel.

On getting power from remote renewables fields, here is the DOE 2018 report:

'Electrical transmission is actually the highest transmission cost among the six analyzed energy carriers and is nearly eight times greater than the cost of transmitting hydrogen via a pipeline.'
https://www.nrel.gov/docs/fy19osti/73353.pdf

Big renewables fields whether solar or wind are far more practical when the energy is converted to hydrogen, at least for the surplus as otherwise the power lines would have have to be drastically over-rated, which is expensive.

Converting to hydrogen on site and pumping it is far preferrable.

I do not believe we can find the room for enough wind and solar to replace current gasoline and diesel with electrofuels, let alone find non-fossil carbon sources for it.

Easy enough to do with nuclear power, though.  Figuring 190 MW(e) out of a Fermi 1-scale FBR using a supercritical CO2 turbine at ~45% efficiency, my breakdown is as follows:

Of course you wouldn't actually do it that way, because it's so much easier and cheaper to replace the bulk of the gasoline and diesel with electricity and batteries.  A Fermi 1-scale reactor is a tiny little thing, only a few meters in diameter; you could easily stick 4-8 in a single building, so you'd only need 25-50 buildings total even if you did go the lossy route.  I'm sure Denmark can find space along its coastlines for another 50 buildings.

@ Thomas Pedersen: Two ways to cover adequately the energy demands with renewables are described in the following. One way is to implement more efficient machines, the other - to stop wasting energy as though it were unlimited.
How many home owners in Denmark have PV-systems installed on their rooftops? 10% or 12%....? How efficient are these panels? 20%, 22% ....? Panels as efficient as up to 35% + are being scaled up for mass production and could reach the market within 2 to 3 years. I would welcome laws obliging every home owner to generate at least so much power as is used in that respective home incl. a battery back-up; more, voluntarily, would be welcome.
Current fridges, freezers and heat pumps are based on the "Carnot Principle" which is not really efficient. That could be vastly improved with appliances based on the magneto-caloric principle (+ 40%). Just plain water is used; no poisonous or flammable substances and absolutely quiet. Such appliances are beginning to slowly emerge on the market. (contin'd)

WTH is going on with Typepad???