Matson, Inc., a leading US carrier in the Pacific, took delivery of its newest vessel, the largest combination container / roll-on, roll-off (con-ro) ship ever built in the United States, from General Dynamics NASSCO. 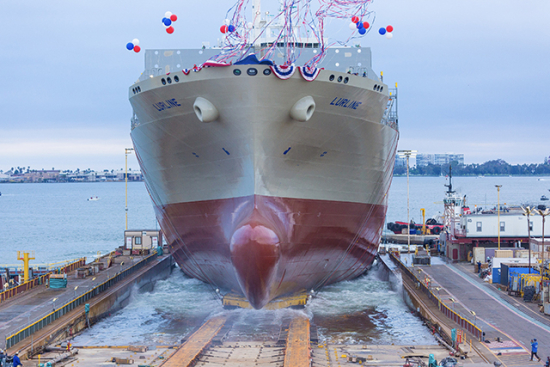 Christened Lurline, the new ship is the first of two Kanaloa Class con-ro vessels being built for Matson by NASSCO at a total cost of approximately $500 million for the pair, and the third of four new vessels that Matson is putting into service between 2018 and 2020. Lurline will make its maiden voyage to Hawaii next month.

Named in honor of the ocean deity revered in the native Hawaiian culture, Matson’s Kanaloa Class ships are built on a 3,500 TEU vessel platform. Main engine horsepower is 42,738 (31,870 kW).

At 870 feet long, 114 feet wide (beam), with a deep draft of 38 feet and weighing in at over 50,000 metric tons, Lurline is now Matson’s largest ship and the largest con-ro vessel ever constructed in the US. It is also one of Matson’s fastest vessels, with a top speed of 23 knots, helping ensure on-time deliveries in Hawaii from Matson’s three West Coast terminals in Seattle, Oakland and Long Beach.

Under the latest IMO requirements for engine manufacturers, Tier 3 engines reduce the levels of particulate emissions by 40% and NOx emissions by 20%, as compared to Tier 2 standards.

The two ships will replace three diesel powered vessels in active service, which will be moved to reserve status. With delivery of the Kanaloa Class ships, along with its two new Aloha Class ships, Matson will have completed the renewal of its Hawaii fleet, allowing it to retire its seven older steamship vessels that will no longer comply with environmental regulations in 2020 without substantial modification.

The first Kanaloa class vessel will be the sixth Matson vessel to bear the iconic name, Lurline. The original Lurline was Capt. William Matson’s second vessel, a brigantine built by Matthew Turner, Shipbuilder of Benicia, California in 1887.