This article is the latest in a series that examines recent changes in various aspects of road transportation in the United States. The focus here is on distance driven per person as opposed to total distance driven (which depends, in part, on the continuously increasing size of the U.S. population). (Earlier post.) The period covered is 1984 through 2018.

The calculations used the total distances driven by all light-duty vehicles (cars and light trucks) from the Federal Highway Administration and the resident populations from ProQuest. (Several of the latter values were recently updated.) The chart below shows the results. 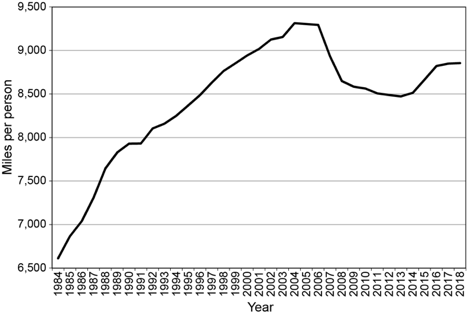 The main findings concerning distance driven per person (summarized in the table below) are as follows:

Anyone know how they measure miles driven per person ?
Who counts as per person:
Everyone in the USA.
Everyone eligible to drive (by age) in the USA ?
All license holders in the USA ?

There are two different measures that I can think of: Per-person or per-capita and per-driver or per-motorist.

Per-driver or per-motorist data provides an indication of the average distance drivers drive, whether on a given day, week, month, year, etc.

The figure and table above reflect per-capita or per person driving data.

Meanwhile, aggregate driving miles in the U.S. in 2018 is a whopping 3.2+ trillion. The most it's ever been.

So, what this is saying is that even though average per-person driving is below the peak of 9,314 miles in 2004 to 8,855 miles in 2018, by virtue of the fact that aggregate annual driving miles is what it is, this suggests to me that more people are taking to the roads more often.

" by virtue of the fact that aggregate annual driving miles is what it is, this suggests to me that more people are taking to the roads more often."

Overall driving in the entire country -- not divided by population -- has gone up because the US population has grown (as pointed out in the article.) But each individual is driving less, if you average it out across the entire population., so per capita driving has gone down.