Scientists have long known that platinum is by far the best catalyst for splitting water molecules to produce hydrogen gas. A new study by Brown University researchers shows why the precious metal works so well—and it’s not the reason that’s been assumed.

Platinum’s high activity has conventionally been explained by its close-to-thermoneutral hydrogen binding energy (G ∼ 0). However, the researchers note, many candidate nonprecious metal catalysts bind hydrogen with similar strengths but exhibit orders-of-magnitude lower activity for this reaction.

The Brown scientists used electronic structure methods that allow fully potential-dependent reaction barriers to be calculated, in order to develop a complete working picture of hydrogen evolution on platinum. Through the resulting ab initio microkinetic models, they assessed the mechanistic origins of Pt’s high activity. 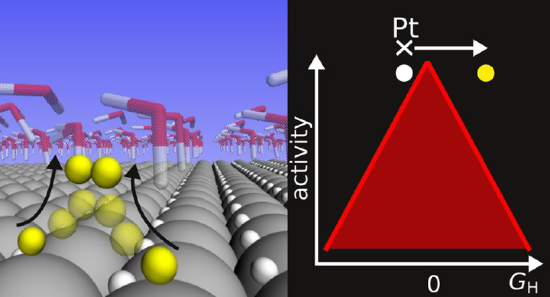 The study shows that hydrogen atoms are loosely bound and highly mobile on the surface of a platinum catalyst during the water splitting reaction. Lindgren et al.

Surprisingly, we find that the G ∼ 0 hydrogen atoms are inert in the kinetically relevant region and that the active hydrogen atoms have ΔG’s much weaker, similar to that of gold. These on-top hydrogens have particularly low barriers, which we compare to those of gold, explaining the high reaction rates, and the exponential variations in coverage lead directly to Pt’s strong kinetic response to the applied potential. This explains the unique reactivity of Pt that is missed by conventional Sabatier analyses and suggests true design criteria for nonprecious alternatives.

The research, published in ACS Catalysis, could aid in designing new catalysts for producing hydrogen that are cheaper and more plentiful than platinum.

Platinum’s success has long been attributed to its “Goldilocks” binding energy. Ideal catalysts hold on to reacting molecules neither too loosely nor too tightly, but somewhere in the middle. Bind the molecules too loosely and it’s difficult to get a reaction started. Bind them too tightly and molecules stick to the catalyst’s surface, making a reaction difficult to complete. The binding energy of hydrogen on platinum just happens to perfectly balance the two parts of the water-splitting reaction—and so most scientists have believed it’s that attribute that makes platinum so effective.

But there were reasons to question whether that picture was correct, said Andrew Peterson, an associate professor in Brown’s School of Engineering and the study’s senior author. For example, molybdenum disulfide (MoS2) has a binding energy similar to platinum, yet is a far worse catalyst for the water-splitting reaction. That suggests that binding energy can’t be the full story, Peterson said.

Their analysis showed that the hydrogen atoms that are bound to the surface of platinum at the “Goldilocks” binding energy don’t actually participate in the reaction at all when the reaction rate is high. Instead, they nestle themselves within the surface crystalline layer of the platinum, where they remain inert bystanders.

The hydrogen atoms that do participate in the reaction are far more weakly bound than the supposed “Goldilocks” energy. And rather than nestling in the lattice, they sit atop the platinum atoms, where they’re free to meet up with each other to form H2 gas.

It's that freedom of movement for hydrogen atoms on the surface that makes platinum so reactive, the researchers conclude.

What this tells us is that looking for this Goldilocks binding energy isn’t the right design principle for the high activity region. We suggest that designing catalysts that put hydrogen in this highly mobile and reactive state is the way to go.

The research was supported by the Office of Naval Research (N00014-16-1-2355). Coauthors on the paper were Per Lindgren and Georg Kastlunger.