Oklo Inc.—a small company based in Sunnyvale, CA, developing a compact fast reactor—has received a Site Use Permit from the US Department of Energy (DOE) to build its Aurora plant at Idaho National Laboratory (INL).

The site use permit makes a site available to Oklo to build its Aurora plant, which utilizes the compact fast reactor design to generate about 1.5 MW of electric power, while having the ability to produce usable heat. The plant uses metal fuel (U-Zr) to produce heat, an advanced fuel type which is well demonstrated with decades of experimental data (the work on EBR-II, a 62.5MWth, 19 MWe sodium-cooled fast reactor with metallic fuel).

Heat pipes carry the heat to a heat exchanger, and a power conversion cycle converts the heat into electricity.

In testimony before the House Committee on Science, Space, and Technology in 2017, Dr. Jacob DeWitte, CEO and Co-Founder of Oklo Inc., explained:

Metal fuels are alloys of uranium or other actinides that combine incredible durability, flexibility, and resilience to achieve phenomenal fuel utilization, manufacturability, and safety behavior. Metal fuel was used in several early experimental reactors operated in the 1950s and 1960s, and showed great promise, but were sidelined until several key engineering discoveries were made through research and development campaigns sponsored by the Atomic Energy Commission (AEC) and then the Department of Energy (DOE) that enabled the fuels to realize their potential.

Oklo is working to commercialize a reactor that builds on the successful legacy of metal fuel. We pursue a business model of following market needs and demands, in other words, we strive to make reactors people want. It can be tempting to push an exciting new technology to market, but miss what the market needs for the sake of the technology, so talking to users to understand what the market wants requires discipline. In our early days, we found the capabilities offered by metal fuel reactor designs fit customer needs, and have continued to find market fit and traction thanks in part to the research and development efforts in metal fuel.

The Aurora design offers a number of unique capabilities. Among these are the ability to produce power for decades without needing to refuel, the small size of the Aurora, the placement of the Aurora fuel underground, the ability to operate without needing cooling water, the demonstrated natural shutdown behavior of the fuel, the use of a fission spectrum which can recycle fuel and ultimately convert nuclear waste to clean energy, and other attributes.

The Aurora powerhouse utilizes an iconic design while keeping practicality and operation in mind. The sloped roof is functional in a range of weather conditions, which can include significant snowfall in some of the areas in which the Aurora may operate. The roofing pieces enable modular construction. There is a front area which may be useful to the community, and a separated back area where the power conversion system is housed. 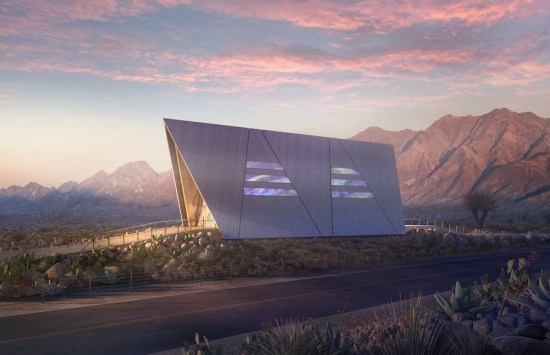 The sloped roof also serves as the support for solar photovoltaic panels, which echo the Oklo logo on the sides of the powerhouse. These solar panels also serve as a canvas for local art which will be developed in tandem with the communities that choose the Aurora as part of their low-carbon microgrid. Oklo has been intentional to include solar panels as part of the Aurora powerhouse to illustrate how advanced fission and renewables can work together in a high reliability, clean microgrid.

This site is anticipated to be the location of the first-of-a-kind deployment of the Aurora plant.

The site use permit is an important step toward commercializing advanced fission technologies, and is the first issued for a non-light water nuclear power reactor. The permit outlines the responsibilities for each party regarding use of the site. The site use permit is in effect for the lifetime of the plant, and puts a requirement on a maximum licensing timeline for Oklo with the regulator before the start of operation.

Oklo entered into a Memorandum of Understanding with DOE in 2017, and the site use permit is an important resultant milestone. DOE is clearly demonstrating its commitment to enabling commercial deployment of novel clean energy technologies, and advanced fission in particular. We are excited to be among the first to exercise this new process.

Two years ago, the DOE Idaho Operations Office developed a new INL site permit application process, and Oklo was the first to complete the new process. Completion of the site permit process exemplifies the ability of DOE to support advanced reactor development and deployment. This also supports objectives laid out by Congress in legislation passed in 2018, the Nuclear Energy Innovation Capabilities Act (NEICA), as well as language in proposed legislation.

INL plays a key role in the development of advanced fission technologies. As the nation’s lead nuclear energy laboratory, INL will be a key collaborator with Oklo as Oklo licenses, constructs and operates the new plant. INL is also laying the groundwork for working with additional advanced reactor technologies to come.

Oklo has been engaged in pre-application activities with the US Nuclear Regulatory Commission (NRC) since 2016 for the Aurora design, and is preparing to submit its first license application to NRC. In accordance with the National Environmental Policy Act (NEPA), an upcoming step before the Aurora plant is built will include preparation of an Environmental Impact Statement.