In August 2019, CRU reported on the steady slide in prices that has occurred in the lithium market since the beginning of the year. Since then, prices have continued to fall, CRU notes.

China is the world’s largest user of lithium, accounting for 57% of global demand in 2019, and is also the biggest supplier of lithium converted products. Many market players look to Chinese lithium spot prices as a bellwether of market health and therefore the continued decline of lithium prices in China has put mounting pressure on the global lithium market, CRU says. 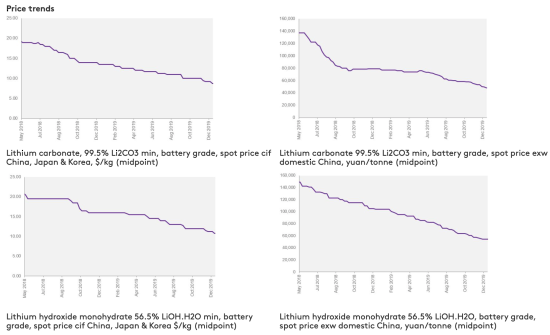 CRU calculates that the Li-ion battery sector accounts for 60% of lithium demand in China, of which EV and portable electronics have the largest share. Portable electronics have long been the mainstay of lithium demand. With 4G handsets now representing 95% of domestic sales, market saturation has resulted in mobile phone sales through to July dropping by 5% year-to-date.

The real driver of lower lithium demand has been disappointing BEV uptake, according to CRU. Chinese EV sales through to July totalled 696,000 this year. Although this marks an impressive 41.5% y/y increase the rate is nonetheless lower than expected by the market.

There are two main reasons for this, according to CRU:

China’s lithium industry is probably one of the country’s most market-oriented sectors, CRU observes, with two major non state-owned companies leading the market: Tianqi Lithium and Ganfeng Lithium. However, the combined conversion capacities of these two market leaders is below 30% of total Chinese capacity.

The rest of the lithium market is fragmented. With no individual entity commanding a large amount of pricing power, the market is extremely cost-driven in practice. In addition, Chinese converters continue to expand aggressively, with Tianqi Lithium claiming to have capacities of more than 100,000 LCE by 2020; and Ganfeng lithium aiming for 200,000 LCE by 2025.

CRU expects to see some marginal improvements on the demand side in the coming months as Q4 is generally a busier buying season. However, it nonetheless believe that low spodumene prices and ample conversion capacity will cause prices to continue their decline in the short-term.

Raw material oversupply. Another factor in the decline in lithium prices is the surge in mine supply. The price explosion in 2016-2018 prompted widespread interest and investment in lithium projects across the world as hard rock mining came to the fore. In Australia, six spodumene mines have commenced production in just three years—much faster than expected and consolidating the country’s position as the world’s leading producer of mined lithium units.

The subsequent influx of spodumene concentrate has pulled prices significantly lower since the second half of last year. CRU’s forecast that production cutbacks and project postponements would come about amid the lower-price environment have started to materialize with a number of leading lithium miners either implementing or suggesting future moderation of mine production.

CRU continues to forecast strong lithium demand growth as a result of the worldwide roll-out of electrified vehicles, and its 5-year demand forecasts are not materially different from that of other market participants.

But strong demand does not immediately translate into high prices, and long-term lithium prices will be governed by cost considerations which place them much lower than 2017-2018 levels. While refinery bottlenecks could cause some short-term volatility in lithium prices (like in all commodity markets), they will not be enough to cause sustained high prices at unjustifiable levels.