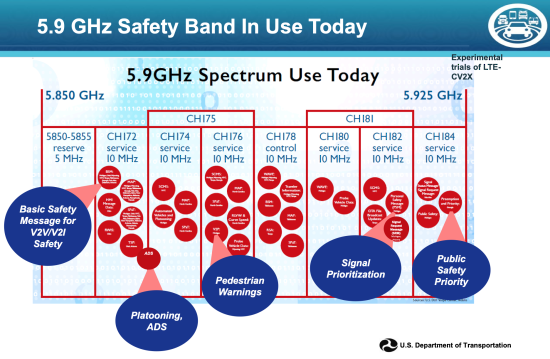 The Safety Band is radio spectrum reserved specifically for transportation safety. In 1999, the Federal Communications Commission (FCC) allocated 75 MHz of radio spectrum in the 5.9 GHz band to be used for vehicle and infrastructure communications. Since then, infrastructure developers and vehicle innovators have developed many smart technologies that rely on the Safety Band, and those innovations all have one thing in common: they depend on clear, uncluttered wireless signals that can help vehicles avoid accidents in the smallest fraction of a second.

Technologies developed to operate in the Safety Band carry messages that allow vehicles to “see” around blind curves and traffic in ways that conventional line-of-sight technologies (including lidar and radar) cannot. They enable traffic and emergency operations to flow safely and know what’s ahead, unaffected by fog, rain, snow and blinding sunbeams.

The devices will be used to evaluate the safety, performance, and capabilities of available equipment, devices, and underlying technologies through both small- and large-scale testing, including scalability and congestion, interoperability, and complex transportation scenarios.

The FHWA anticipates awarding multiple, firm-fixed priced contracts as a result of the BAA. The period of performance for each contract shall not exceed 18 months from the effective date of the contract award.